From bins to bellies 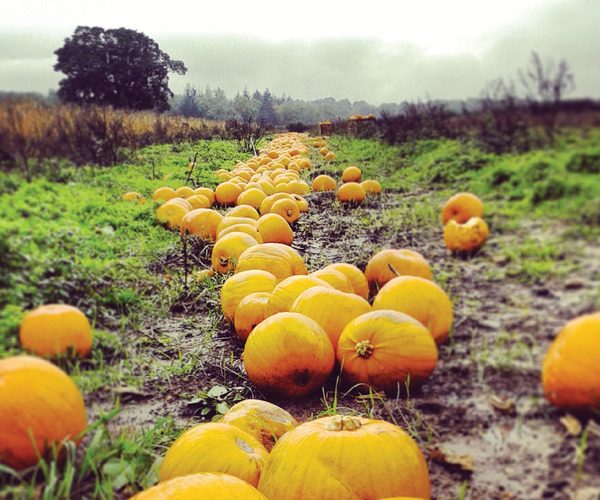 Gleaners recover tonnes of pumpkins such as these at a farm near Southampton, England.
Photo: Gleaning Network UK

‘The chips aren’t very popular, so we’ll have the potatoes,’ says Lorraine, a worker at a homeless shelter in Oxford, England. On offer today in the Oxford Food Bank’s van are crates of Christmas pudding, lettuce, bananas, avocados, cookies, eggs and bread. Lots of bread. Everything apart from meat is collected by the organization and redistributed to local community charity projects across the city.

Lisa, another volunteer, remarks that the food bank feels like a mobile business, albeit a philanthropic one, rather than a means to distribute ‘waste’. Oxford Food Bank users know what they want, and in turn volunteers know to ‘informally ration’ certain items. If much of this food is ‘waste’, why do people want it? And why do customers crowd around the reduced section in a supermarket, while far greater amounts of imperfect produce are unceremoniously binned?

It is legal for shops to sell food past its ‘best before’ date but many do not. ‘Best before’ dates are more about quality than safety, with the exception of eggs, according to the British Food Standards Agency.

Doug Rauch, former president of US grocery store chain Trader Joe’s launched Daily Table last month, a non-profit store in Boston selling only goods past shops’ sell-by dates – at half price. Donations of food by supermarkets and other suppliers are tax deducted, encouraging food distribution rather than waste.

Most supermarkets blame fussy customers, while customers blame supermarkets seeking perfection for wasting produce that is fit to eat. However, campaigns such as the Best Before Project in Britain that encourage businesses either to sell or donate food past its best before date could help prevent such circular arguments.

‘Climb resistant paint’ reads the sign as I consider my ability to hop over my local Co-operative supermarket’s locked gates. Having just peeked through a hole to see two workers dump large sacks of edible excess into an industrial-sized bin, I know there is plenty of food waiting to be recovered. The attitude of supermarkets towards dumpster diving can call into doubt their more benevolent face as sponsors of local food banks. But, as Tristram Stuart writes in his book Waste, ‘if people let food perish in their possession, they lose the right to own it.’

While supermarkets prosecute food reclaimers, they regularly decline produce from domestic and overseas producers that does not meet cosmetic standards or is surplus to requirements, without offering compensation or facing a fine. For some farmers, this can mean that 20 to 40 per cent of their harvest can go to waste, even 100 per cent if weather conditions have ruined the look of the produce. While it will not improve farmers’ financial woes, the age-old practice of collecting leftover crops from farmers’ fields – gleaning – is enjoying a surge in popularity. Canadian volunteer-led group Not Far From The Tree puts Toronto’s fruit to good use by picking and sharing the bounty.

Between 30 and 50 per cent of the world’s food is wasted every year – half of it in producing countries that struggle with post-harvest loss due to inadequate storage; and half in rich nations where supermarkets and consumers eschew imperfection and treat food as a surplus good.

The way we treat grain in the West directly affects producers in the Majority World. A few slices of bread thrown away at the end of each loaf by caterers and consumers contributes to an increase in global demand for grain, hiking up prices so that vital foodstuffs are out of the reach of the world’s poorest. If particular grains are shunned in rich countries in favour of a new ‘superfood’, for example, farmers are left with surplus crops fetching rock-bottom prices – with no alternative but to sell their produce before it spoils.

Good post-harvest management is important to reduce food loss and its environmental and economic impact. Agricultural NGO Groundswell International works in countries such as Burkina Faso and Ecuador, training farmers in techniques to improve food security and reduce waste. ‘One particularly successful post-harvest management strategy is metal grain storage silos in Haiti,’ says Chris Sacco, the organization’s Director of Operations. ‘Farmers are not only taught how to use the silos; they also learn how to make them from scratch.’

In India, Vaibhav Tidke and Shital Somani are developing what they hope will be a solution for millions of farmers and gardeners around the country: a solar convection dryer, suitable for fruit, vegetables and meat. The dryer dehydrates food, increasing its shelf life to a year, while retaining nutrients. Water can be added back in just before the food is eaten.

Farmers may be battling to ensure their produce survives storage and transportation overseas, but once in the world’s cafés, hotels and restaurants, food often faces a protracted journey to the bin. British restaurants alone waste 600,000 tonnes of food each year. But financial incentives and penalties could be a way of breaking this habit. Fed up with seeing full plates discarded during Ramadan after the nightly breaking of the fast, a restaurant in Saudi Arabia, Marmar, began three years ago to fine customers for leaving food, donating the money to charity. And in the US, chef Andrew Shakman created LeanPath, a food waste tracking system, in 2003 to spur on kitchen staff to be more careful with food. The system quantifies how much food is thrown out due to spoilage, expiration or overproduction. A camera documents each portion of food as it is thrown away. Workers can then see the equivalent of that food in terms of financial and environmental waste, while a scoreboard encourages competition between colleagues to save on edible excess.

South Korea and Japan are big believers in converting food surplus into feed for pigs, but they often employ energy-intensive methods. Since the outbreak of foot-and-mouth disease in Britain in 2001, there has been an EU-wide ban on feeding food scraps – or swill – to pigs. The Pig Idea campaign aims to overturn the ban, both to divert food from landfill and to address the environmental and ethical impact of using 97 per cent of the world’s soy to feed livestock instead of people.

A fork and trowel: treasuring food

If wasting food is symptomatic of greed, ingratitude or ignorance, growing your own teaches its true value. ‘Gardening is a great way to connect people with their food,’ says Rob Pearce from Edible Garden City Project in Singapore.

‘When you grow your own, you harvest just when you want it, saving waste and giving you the freshest, tastiest and most nutritious food. Lots of children come to our workshops or community gardening sessions. This is great not just because it gets their hands dirty and they know where food comes from, but also because they value their food as they know how hard it is to grow.’

A billion people are starving worldwide, while 1.4 billion are overweight. The world’s population is steadily increasing and there is precious little room left for our waste to disappear into. From food growing to food sharing, community initiatives are challenging these issues.

Australian organization Food Know How, for example, offers community workshops on how to convert food waste into fertile soil by making Bokashi bins (easier to use than composters) and outdoor wormeries.

Be a ‘gangster with your shovel’ says guerrilla gardener Ron Finley who, with others, gardens on land he doesn’t have the legal right to use, on roadside plots and abandoned sites around Los Angeles.

Eating and distributing food before it becomes waste is where the revolution begins.

Of speech and species
Valeria's story