Anne Hoffman hears about the struggle for reproductive rights in Chile. 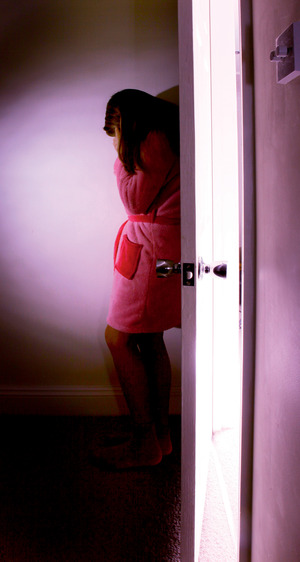 Many of the stories you hear about abortion in Chile involve women who meet horrible ends. ‘I imagined some little girl dead in a field. The stuff they show on TV is always so harsh and judgmental’
Photo: Robin Beckham / BEEPstock / Alamy

About a year ago, a 25-year-old woman named Valeria went to a motel looking to rent a room. She lived in the city, and would only need it a few hours. Valeria hadn’t dated anyone in five months, but she brought her old boyfriend with her. After she spoke with the desk clerk, who gave her the room keys, Valeria laid out several doses of a drug called misoprostol. Each pill was a small white hexagon, and she would take 10 or 12 over the course of a few hours in order to end her pregnancy.

Valeria had been to the doctor a few days earlier, looking for solutions: ‘A little baby, what am I going to do with a baby?’ While she did want to be a mother one day, now was not the time. She had just finished her social-work degree and still lived at home.

The doctor told Valeria she should start taking prenatal vitamins. She made her listen to the foetal heartbeat. She seemed to be in a deep fog of denial.

Valeria was frustrated, but she had little idea of where to seek out an abortion or what one would be like. Many of the stories you hear about abortion in Chile involve women who meet horrible ends, Valeria says. ‘I imagined some little girl dead in a field. The stuff they show on TV is always so harsh and judgmental.’

Most children in Chile don’t receive sex education at school, so myths abound. Parents and family members often shy away from talking about sex. Up until a few generations ago, some mothers didn’t even explain menstruation to their daughters. ‘I thought I was dying when I first got my period,’ says Carmen Pinto Sagredo, a Chilean mother who lives in Valparaiso.

According to sociologist Catalina Flores, teenagers in Chile believe to this day any number of erroneous but oft-repeated ideas about sex and pregnancy: that if a girl urinates after sex, she cannot get pregnant, for example. There is still very little public discourse around safe sex, personal boundaries and prevention. Chile is a secular state, but the Catholic Church in general and the conservative group Opus Dei in particular have undeniable influence over policy and schools.

Valeria’s desire to end her pregnancy did involve certifiable risks. In Chile, medical doctors have little experience of performing abortions. They learn just one method, called curettage, in case a woman miscarries. Curettage involves scraping out the lining of the uterus, and is far less sophisticated and much riskier than the aspiration procedure that doctors practise in the US and most of the Western world.

When women get pregnant in Chile and decide they don’t want to carry their pregnancy to term, they are left with few options.

They could fly to Miami or Havana, check in to a clinic for an abortion and then recuperate on the beach for a few days afterwards. But purchasing a plane ticket to the US or Cuba, on top of paying medical expenses, is not an option available to most women in Chile, where the rate of income inequality is one of the highest in the world.

Many of the stories you hear about abortion in Chile involve women who meet horrible ends. ‘I imagined some little girl dead in a field. The stuff they show on TV is always so harsh and judgmental’

Another possibility is to seek out a secret clinic at home, where a well-trained doctor will carry out an abortion right under the noses of conservative policymakers. But secret clinics have a lot of overheads, so abortions are expensive – as much as twice the monthly minimum wage.

Until recently, the only other option was a visit to la partera, a midwife whose methods include douching with parsley. But the downside of such treatment is that it is unlikely to end the pregnancy. At worst, one faces the possibility of infection and serious medical complications.

Abortion access opened up for a while with the introduction of a drug called misoprostol, which was traditionally prescribed to treat stomach ulcers. If taken in sufficient quantities, t will induce an abortion during the early stages of a pregnancy.

Abortion access opened up for a while with the introduction of a drug called misoprostol, which was traditionally prescribed to treat stomach ulcers. If taken in sufficient quantities, it will induce an abortion during the early stages of a pregnancy.

When women and their gynaecologists realized that misoprostol could end pregnancies in the privacy and comfort of one’s home, the drug became very popular. One gynaecologist admitted that she used to write prescriptions for teenage girls.

Once the government woke up to its alternative use, however, they banned it. Although still used in hospitals, it is no longer available in pharmacies and is therefore nearly impossible to get hold of.

And so began a black market in misoprostol sales. There are dozens of websites selling the drug but what you receive is, more often than not, something else. It is aspirin, or perhaps a sugar pill. For the discerning customer, crooks are easy to spot, because they sell two or three tablets as opposed to the necessary 10 or 12, or the pills they supply are the wrong shape.

Valeria did not let her visit to the doctor discourage her. Following a friend’s advice, she called the Lesbians and Feminists for the Right to Information hotline. The group is composed of a wide swath of Santiago’s queer community: soft-spoken femmes, big-boned butches and American straight girls who consider themselves ‘politically lesbian’. The group sees Chile as a ‘profoundly sexist country’ that restricts abortion to keep close tabs on female sexuality and access to pleasure.

The hotline is actually a cellphone that group members hand over to each other at the end of their shift. Each member follows a strict protocol. The person on the other end of Valeria’s call had to record their conversation for legal purposes. They could only speak to Valeria in the third person, saying things like, ‘A pregnant woman can take 12 misoprostol pills to induce an abortion.’ Addressing Valeria as ‘you’ would have been crossing a clear legal line, and would have put the hotline, which has already been investigated by Chilean police three times, at risk.

Valeria also met a sympathetic doctor, who directed her to a Dutch NGO called Mujeres Sobre Las Olas (Women On Waves). The group operates a sliding scale of fees for the medication they supply. At first, Valeria couldn’t afford the pills but, given her low income, they lowered the price.

After she took her pills, Valeria experienced painful cramping, similar to a heavy period. Misoprostol causes contractions in a pregnant woman’s womb, and those contractions evacuate the foetus. Valeria rested and took comfort from the man who had got her pregnant.

‘It was easy, tranquilo,’ she says about that day in the hotel room. ‘It was painful, but not so painful, either.’

When it was all over, Valeria checked out of the motel and went home. In time, she became friends with the group of women who ran the feminist hotline. Many of these women had themselves been to secret clinics or aborted with parteras. They invited Valeria over to their communal house in a bohemian neighbourhood of Santiago, where she drank special coffee made from corn.

When her parents asked her how she had met these new friends, she omitted parts of the truth. No-one in her family knows about that day in the motel with her ex-boyfriend, nor about the small white hexagons. She would rather not open up the Pandora’s box of familial judgment and social stigma. So that memory belongs to Valeria. ‘It was my decision,’ she says resolutely. ‘It had to do with the love I have for myself.’

Anne Hoffman is a journalist in San Francisco who learned Spanish in living rooms all over Latin America.