Encouraging people to act out their trauma results not just in empathy but in action. Hjalmar Jorge Joffre-Eichhorn has witnessed the transformation first hand. 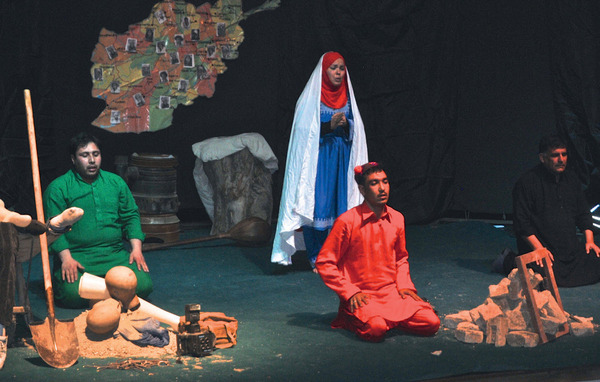 After more than 30 years of war, Afghanistan is a country synonymous with suffering, its people facing a crippled economy and infrastructure as well as bereavement on an unimaginable scale.

Amid the continuing turmoil a participative theatre initiative is helping some Afghans move towards justice and reconciliation by, literally, putting them centre stage. ‘People fell in love with the Theatre for the Oppressed,’ says Hjalmar Joffre-Eichhorn, spokesperson for the Afghanistan Human Rights and Democracy Organization (AHRDO), which was born out of a vision to work with the most marginalized sectors of society.

Their first outing, five years ago, was a traditional scripted play performed by victims’ groups. Since then, AHRDO has continued to function despite the unrest, and it now employs women and men from around the country.

The aim of the theatre is not to point fingers of blame. But there is, says Hjalmar, an issue of transitional justice – the idea of redressing human rights violations following conflict: ‘Dealing with the past in a community-led way is where theatre comes in: it encourages a dialogue between different groups in society.’

AHRDO runs two main projects using different theatre techniques. Forum theatre explores issues of victimhood and the plays are developed by the ‘victims’ themselves. ‘Afghan widows are marginalized on two counts [as women and as widows], but by participating in theatre, they can tell their stories and promote two concepts lacking in Afghan society: democracy and justice,’ says Hjalmar.

‘Widows haven’t had their victimhood acknowledged yet. They want the government to be responsible for the murder of their husbands. The word “victim” doesn’t have positive connotations; it clashes with the notion of healing, and has received some criticism from Western NGOs.’ But coming to terms with loss is not easy when the perpetrators of unlawful killings are not brought to justice; accountability for human rights abuses has fallen off the government’s agenda.

‘Usually theatre is passive, but forum theatre is different – the audience is encouraged to participate by going on stage and coming up with a solution together,’ Hjalmar explains. ‘Up to 500 people can be in the audience at any one time. The aim of the theatre is dialogue, and its goal is to turn empathy into action.’

As well as the plays, the widows have created ‘memory boxes’, using artefacts, poetry and photos to tell their life stories. A hundred widows have exhibited their boxes in Kabul and Mazar-e-Sharif, and in embassies.

Another project working with men and women focuses on women’s rights using legislative theatre. ‘We have worked with more than 5,000 women from six provinces in Afghanistan,’ notes Hjalmar. Women act out events in their lives to illustrate different issues and problems they face, such as forced marriage. The plays rarely have a happy ending. Participation is powerful: the audience’s solutions to the different issues are written down and common themes examined. The ideas gathered from one early rural theatre production were taken to a lawyer, who collated them into a legal report with 24 recommendations for new legislation concerning women’s rights. These were presented to the Afghan parliament. Now the document is used by MPs who are part of the Women’s Commission.

Zahra is one of the legislative theatre facilitators. ‘She embraced the theatre because it embodied something powerful,’ Hjalmar recalls. ‘But she was threatened, beaten up and forced into exile. The themes that we explore are not always welcomed; theatre exposes people. But Zahra has now returned. Theatre changed her life and she is willing to die for it.’

The future is uncertain, however. Violence, particularly towards women, is on the rise, partly due to the current withdrawal of foreign troops and post-election uncertainty. People are worried about the Taliban coming back.

‘The organization could close next week, next month, any time, because of the changing situation. And people are tired. It is impossible to plan ahead if every day you fear you or one of your loved ones might be killed.’

But there is still space for hope. ‘There are difficulties, but change is happening – and we continue because we want to create spaces for self-empowerment, and because stories need to be heard,’ says Hjalmar.