The duty to care for our common home

Femke Wijdekop makes the case for Ecocide to become a crime under international law. 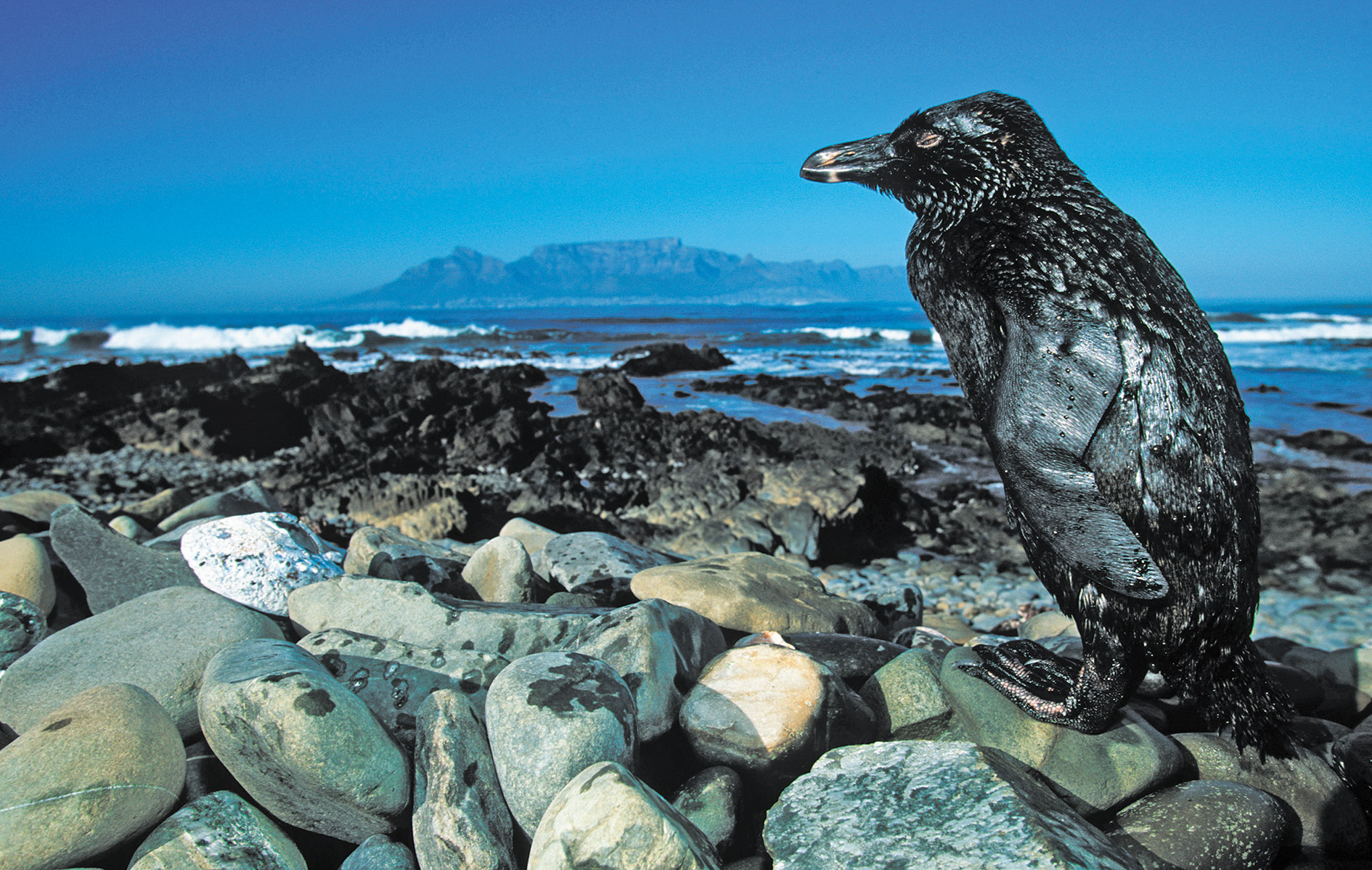 Portent of doom: a penguin covered in oil following a spill off the coast of South Africa.
Photo: Martin Harvey/Alamy Stock Photo

2015 was an important year for climate lawsuits. The landmark Urgenda case in the Netherlands – in which the district court in The Hague ruled that the Dutch government had a legal duty of care towards current and future generations to lower its CO2 emissions – stimulated NGOs in countries such as France, Belgium and Norway to start similar lawsuits. In the US, eight youth petitioners who requested that the Department of Ecology in Washington State write a carbon emissions rule to protect the atmosphere had their moment of victory on 19 November, when Judge Hollis R Hill ruled that the State has a constitutional obligation to preserve, protect and enhance the air quality for current and future generations.

These rulings give NGOs and citizens powerful tools in their pursuit of climate justice. In 2016, the case for climate and environmental justice might be strengthened in an even more revolutionary way. Lawyers in different parts of the world are advocating the introduction of a legal duty of care towards the natural world. These lawyers recognize that our current laws and environmental regulations are failing to protect the natural world from over-exploitation and corporate abuse. They want to protect the integrity and functioning of ecosystems by making Ecocide – the massive damage and destruction of ecosystems, such as the Deep Horizon oil spill, deforestation of the Amazon, large-scale fracking or the Athabasca tar sands – an international crime. Their proposal is to add Ecocide as the fifth crime against peace to the Rome Statute of the International Criminal Court (ICC) in The Hague, alongside crimes of aggression, war crimes, genocide and crimes against humanity.

The term ‘Ecocide’ was coined by US biologist Arthur Galston. In the 1950s, Galston was part of a team of scientists who helped prepare a chemical component for the defoliant Agent Orange. When he was confronted with its use in the Vietnam War – poisoning human health and destroying vegetation on an enormous scale – Galston turned into a fervent anti-war activist. At the 1970 Conference on War and National Responsibility, he called the massive damage and destruction of the Vietnamese jungle an ‘Ecocide’. The word derives from the Greek oikos, meaning home, and the Latin caedere, which means to demolish or kill. Ecocide thus translates as ‘killing our home’.

Galston’s plea to stop the Ecocide in Vietnam was picked up by anti-war protesters in the US and Europe. Swedish Prime Minister Olof Palme, during his opening speech at the 1972 UN Stockholm Conference on the Human Environment, called the Vietnam War ‘an outrage, sometimes described as Ecocide’.1 During the 1970s and 1980s, the idea of expanding the 1948 Genocide Convention led to extensive studies within the UN as to which crimes should be included; several countries supported the inclusion of Ecocide. The 1991 draft of the Code of Offences Against the Peace and Security of Mankind (the precursor to the Rome Statute of the ICC) included Article 26, which read: ‘An individual who wilfully causes or orders the causing of widespread, long-term and severe damage to the natural environment shall, on conviction thereof, be sentenced…’. In 1995, however, this provision was withdrawn from the draft Code by the International Law Commission. The Rome Statute now only prohibits Ecocide in times of war, which, probably due to its high thresholds, has never been invoked.

In 2008, Scottish lawyer Polly Higgins set out on a quest to develop a solid legal framework to protect the natural world. She came across the concept of Ecocide and in 2010 proposed that the International Law Commission modify the Rome Statute to include Ecocide. Higgins defines Ecocide as the ‘extensive damage to, destruction of or loss of ecosystem(s) to such an extent that peaceful enjoyment by the inhabitants of that territory is severely diminished’. The term ‘inhabitants’ can refer to humans or animals residing in the affected territory. She proposes personal liability for CEOs or State officials who are at the top of the command chain and whose decisions result in Ecocide. 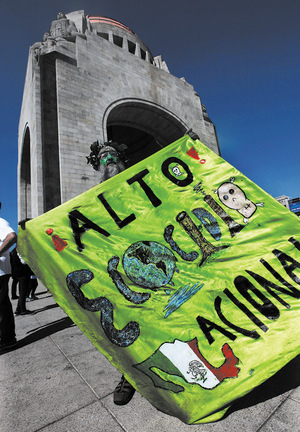 ‘Stop the national ecocide’: a Mexican protester’s message to his leaders ahead of the Paris climate talks last year.
Marco Ugarte/AP/Press Association Images

Higgins’ work to make Ecocide an international crime sparked the creation of a European Citizens’ Initiative to petition the European Commission to make Ecocide a crime in Europe. End Ecocide in Europe did not collect the needed million signatures, but it did present the petition at various committee meetings of the European Parliament and evolved into a global grassroots movement called End Ecocide on Earth, with its own proposition for an Ecocide amendment.

In the academic world, both Australian law professor Steven Freeland and French law professor Laurens Neyret published books in 2015 with detailed proposals to make environmental destruction a crime under international law. Canadian philosopher and legal scholar Laura Westra has been researching the criminality of eco-crimes for over 10 years. And Argentinian Nobel Peace Prize winner Adolfo Pérez Esquivel is advocating the establishment of an international tribunal for crimes against the environment.

At the UN climate summit in Paris last year (COP21), End Ecocide on Earth’s representative Valerie Cabanes handed over its Ecocide amendment to UN Secretary-General Ban Ki-moon. The amendment focuses on the protection of the global commons – such as the atmosphere, the oceans and seas beyond territorial waters, the Arctic and migratory species. These global natural resources are called Res nullius in law: they belong to no-one and should no longer be the scene of pollution and abusive exploitation. End Ecocide on Earth also considers that the destruction of an ecosystem ‘service’ on which a human community depends is equal to a crime against humanity.

The amendment was used by the International Tribunal for the Rights of Nature in its session at COP21 on the Chevron oil spill in the Ecuadorian Amazon. This People’s Tribunal was established in Paris on 4 December 2015 and judges cases on the basis of the Universal Declaration of the Rights of Mother Earth. It found Chevron guilty of Ecocide and called for restorative justice. It also noted that Chevron’s directors and corrupt government officials could personally be criminally liable. The judgment carries moral authority and legal weight (the judges of the Tribunal are highly respected lawyers and environmental leaders), but it is not legally binding since People’s Tribunals act independently of State authorities. An official, binding UN tribunal on the environment is needed, and Ecuador’s president, Rafael Correa, has called for the creation of just such an international court to judge crimes against nature.2 The call, made at COP21, was supported by Bolivia and Venezuela, but it did not get the support of other heads of state and received little attention in the press.

The focus of both Higgins’ and End Ecocide on Earth’s work, however, is not to create a new international court – which would cost a lot of time and resources – but to find a head of state who is willing to propose an Ecocide amendment to the International Criminal Court. The treaty of the Rome Statute can be amended if a two-thirds majority (82 heads of state) vote in favour.

Small Island Developing States (SIDS) seem the most likely candidates to move the amendment forward. SIDs are low-lying, coastal countries, mainly islands of the Caribbean Sea and the Atlantic, Indian and Pacific Oceans. They are particularly vulnerable to tornadoes and rising sealevels caused by climate change. They risk losing their entire territories, yet a climate displacement co-ordination facility to help them with future climate migration was withdrawn from the COP21 negotiations. Higgins wants to create a legal duty of care for the international community to give assistance to these island nations. Failure to do so or to stop dangerous climate-changing industrial activity such as fossil-fuel extraction constitutes an Ecocide. With the number of SIDS adding up to over 40, they could form a powerful voting bloc to propose an Ecocide amendment at the ICC.

If the SIDS take this initiative, they will then need to get enough other heads of state on board to reach a two-thirds majority. It will likely take an enormous amount of pressure from civil society to convince heads of states to make Ecocide a crime, given the extremely powerful lobby of the fossil-fuel and extractive industries.

However, there are developments that suggest society’s support for an Ecocide Law will continue to grow in the coming years. There will be a series of People’s Tribunals dedicated to different types of Ecocide. The first one – the People’s Tribunal against Monsanto – will take place in October 2016 in The Hague, with Indian environmental activist Vandana Shiva playing a key role. People’s Tribunals on fracking, mega-dams, Exxon and other oil companies will follow in 2017. These Tribunals will aim to educate the public about Ecocide; provide witnesses of Ecocide with the opportunity for their testimony to be heard, documented and entered into the public record; and develop arguments and laws that can later be used in national and international courts.

Another development is the advocacy of Pope Francis for environmental justice. In his encyclical Laudato Si’, he calls upon us to care for our common home, on behalf of current and future generations. He warns that market forces are violating the integrity of our natural environment and says it is a mistake to think of other species as mere ‘resources’ to be exploited, instead of having value in and of themselves. Laudato Si’ inspired prominent Catholic groups to support young plaintiffs at a federal climate-change lawsuit in the US, after Oregon’s District Court granted defendant status to three trade associations representing nearly all the world’s fossil-fuel companies.3 If the Pope’s environmental advocacy continues to mobilize faith groups to get involved in environmental justice, and if these groups dare to cross over to the realm of criminal law, the advocates for Ecocide law might find a powerful ally at their side.

Femke Wijdekop is a senior expert in environmental justice at IUCN Netherlands and the legal counsel of Stop Ecocide.