Chris Brazier returns to the village in Burkina Faso that he has visited every 10 years since helping to make a film there in 1985. 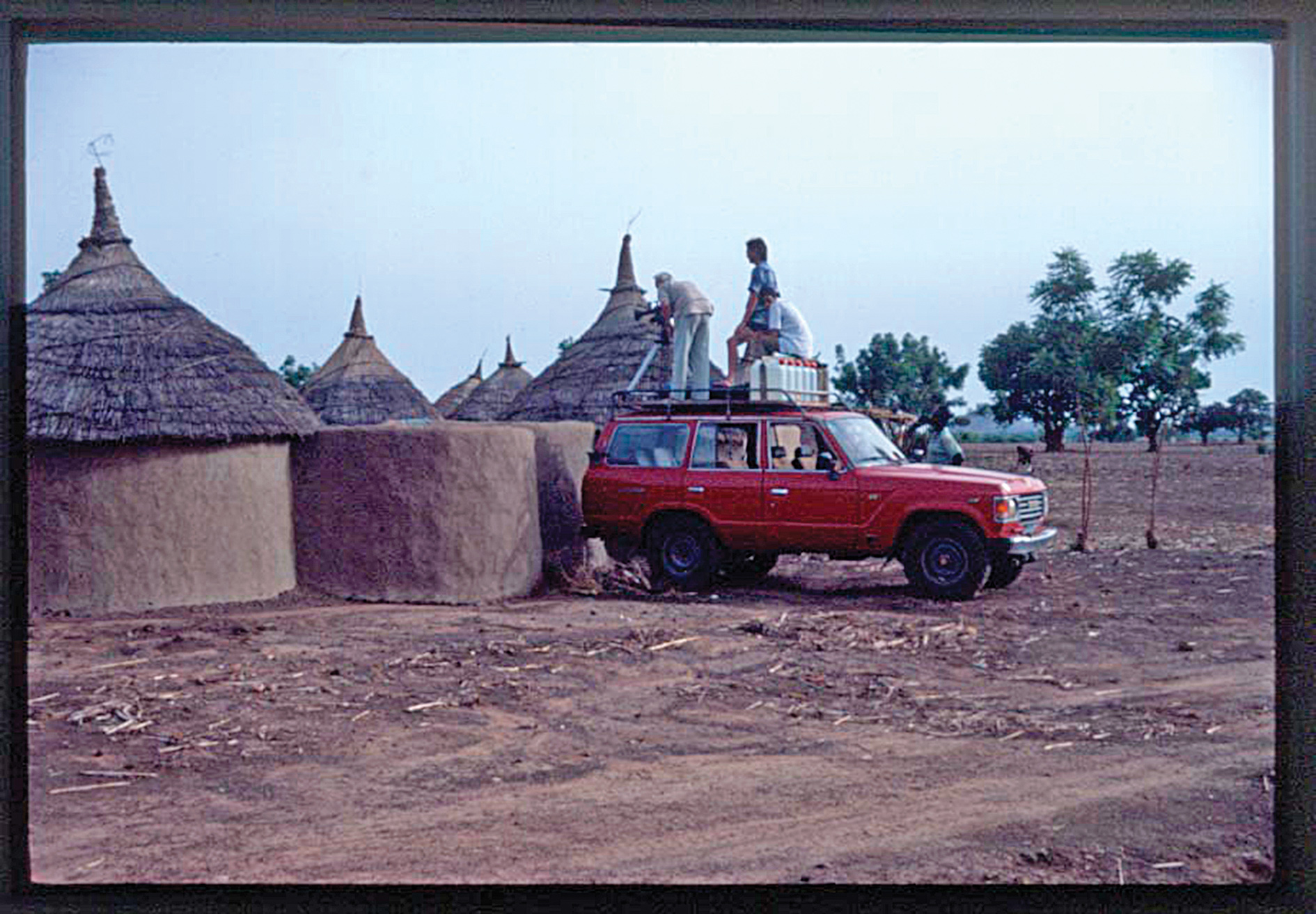 The great French photographer and filmmaker Claude Sauvageot shooting the compound of Adama and Zenabou in 1985, with director Christopher Sheppard looking on.
Photo: Claude Sauvageot

There is a new road to Sabtenga and, remarkably, I am travelling along it – gingerly, and with no small danger to the life and limb of those around me – on a motor scooter. In a way the changes in my mode of transport have mirrored developments locally.

When I first came here, in 1985, I was part of a film crew with its hired four-wheel-drive vehicle carrying equipment and fording streams, though once in the village itself I went everywhere on foot. In 1995, on my first solo return, I walked everywhere, regularly covering the four kilometres to the town of Garango as well as considerable distances every day in my wanderings around the village, which sprawls over a wide area. In 2005 I based myself in Garango and travelled to and around the village on a bicycle that I bought in the market and then gave away at the end of my trip.

I had assumed I would be doing the same this time, but instead the excellent local NGO Association Dakupa, which has provided me with invaluable help on all my visits, has furnished me with motorized transport of my own. 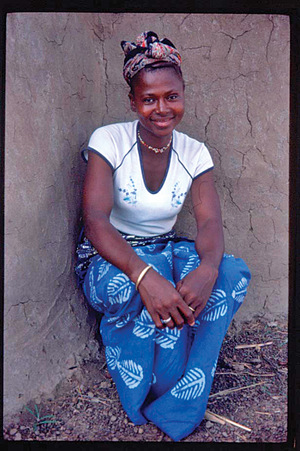 I spent my 30th birthday in Sabtenga in the summer of 1985. I was a relatively recent recruit to New Internationalist and, when given the task of finding a woman farmer who could tell her story to camera in our TV film Man-Made Famine, I opted, rather brashly, to seek her out in Burkina Faso, which was in the middle of a tumultuous revolution. When we found a suitable subject in Sabtenga, a village in the southeast near the border with Ghana and Togo, it was not through my own endeavours but through a contact of the director’s, and I was the least useful member of the team. So, instead of hanging around the often tedious filming process, I took to wandering around the village in the company of a young woman, Mariama Gamené, who had been elected as a female representative on the local Committee for the Defence of the Revolution and who had learned enough French at school to be able to act as my interpreter and guide.

I soon realized that, through sheer good fortune, I had been given a remarkable opportunity, in human as well as journalistic terms. The village was about as far removed from life in the Western world as could be imagined. Its inhabitants lived by subsistence farming, coaxing what crops they could from the unyielding earth of the Sahel region. Most seemed not even to have animals to help them in the fields, but turned the earth over in backbreaking work with hand-hoes called dabas. Water had to be carried in large bowls on the head from wells that were often a long distance away. In most families the man, undisputed head of the household, would take more than one wife. The village had neither a school nor a health centre of its own.

In other words, this was a village that had experienced not a trace of the ‘development’ that was regularly discussed in our magazine or envisioned in the corridors of power at the United Nations or the World Bank.

Despite this immense distance from Western life, in terms of culture as much as wealth, I was staggered to discover how similar to people back home the inhabitants of Sabtenga seemed. For all that I was committed to notions of global justice and equality, I had to that point still been guilty deep down of lumping all Africans into a Pandora’s box marked ‘poverty, famine, conflict etc’. I understood now, in emotional rather than just intellectual terms, that every individual had their own unique story to tell, most of which would be to do with making ends meet, and drawing strength and sustenance from family and friends. As I was later to write: ‘Once you’re in the village, you not only know that life is possible here but also that it has its full quota of human drama. People come alive for you. African villagers stop being statistics in a thesis, cyphers on a printed page. They have real bodies, real feelings – lives that have a beginning and a middle, not just some horribly painful end. Their loving and their laughing, their dancing and their dreaming, their pain and their joy are not that different from our own.’

Put more simply, across that vast material and cultural gulf, I felt able to make friends. Of course, Mariama was the key to that. She was amazingly generous with her time and remarkably open in talking to me about her own life and attitudes. Her own popularity and respected status opened all kinds of doors to me that would normally have been impenetrable for a visiting journalist.

My experience in Sabtenga in 1985 changed the way I looked at the world and informed everything I wrote over the next decade. But I still felt I had not made the most of this unique opportunity and so persuaded New Internationalist to send me back in 1995, to report on changes that had taken place in the life of the community over the course of another decade of ‘development’. 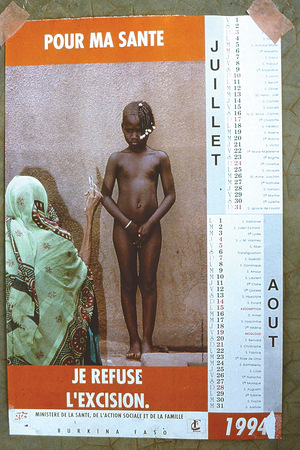 It had proved impossible to keep in touch with the villagers by post, so I had no idea what I would find – or even whether the people I had come to know best would still be alive. Our stay there in 1985 had been at a difficult time, when the rains had failed to materialize and food stocks had dwindled to almost nothing, and any kind of calamity seemed possible, especially when reading about Burkina Faso’s generally dire poverty and health statistics. What is more, that hopeful egalitarian revolution had been strangled by the new, corrupt president, Blaise Compaoré, who had murdered his visionary former comrade Thomas Sankara in 1987 before setting out on a much more traditional, self-enriching course.

Yet to my great pleasure, not only were my key contacts all alive and well but there were also many positive changes to report in development terms. There was now a school with three classrooms – offering only around half of the places needed but, nevertheless, a clear sign of progress. And the ‘clinic’, which had previously been an empty building with neither medicines nor staff, was now a fully functioning health centre with a nurse, and his wife as an assistant, which was particularly active in caring for mothers and babies.

Delivering many of those babies was Mariama herself, who was paid a very modest amount as a full-time assistant health worker, though untrained by anything but the experience she had gained on the job. She was now 38 and had seven children. She had told me 10 years earlier that she wanted no more than the four children she had at that point, conscious of the constant demands associated with parenting and feeling that she wanted to do more with her life. But her husband Issa had overruled her, subscribing to the traditional peasant notion that having more children would offer more help in the fields and more security in old age. Besides, reliable methods of contraception had not arrived from the capital until the early 1990s.

The biggest and most hopeful story I had to report in 1995, however, also related directly to Mariama’s own life. Ten years before, I had discovered that she was the first and only mother in the village to take a stand against the practice of female genital mutilation (FGM) and not allow her oldest daughter Memnatu to be cut as she herself had once been. I went back full of trepidation on this front. Would she have been forced to conform by her husband or the village authorities? Might one of the old ‘wise women’ have taken matters into her own hands and used the razor on Memnatu anyway? 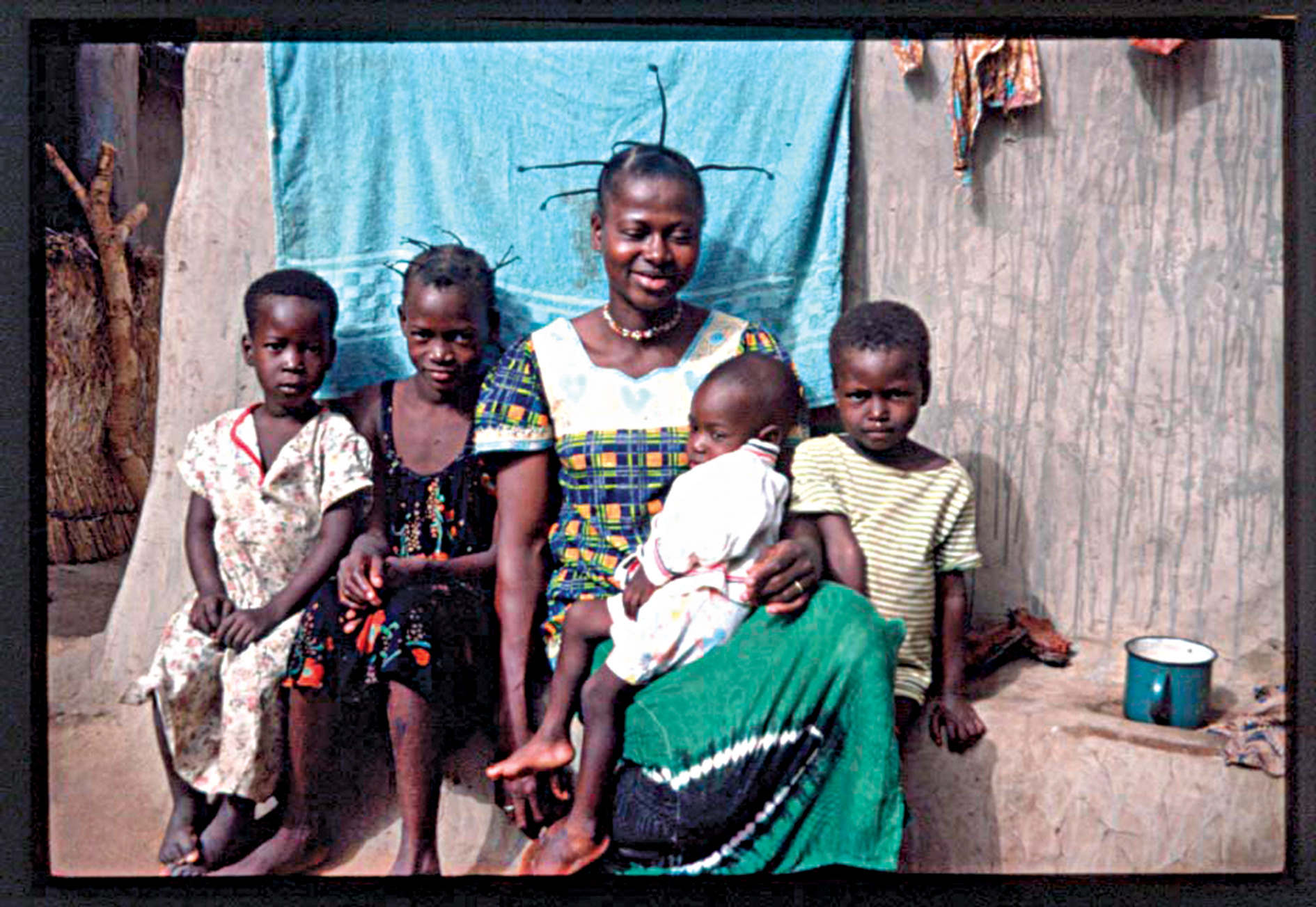 What I found was truly remarkable. Not only were Memnatu and her sister Aseta still intact, but, through a combination of local pressure from women like Mariama and government messages about the disastrous health implications of FGM, the tide of opinion in the village had turned. The old, near-blind Chief told me how and why he had been converted to believing that FGM should be discontinued – and one of the old women who had herself been wielding the razor up to three years before told me that even she had come round to the new way of thinking.

I am back. What changes will I find in people’s lives this time around?

The 1995 magazine Heart and Soul: ten years of change in an African village was seen as successful enough that I was pushing at an open door when I suggested returning to write a further instalment 10 years later. And, while in 2005 the village was still very much a subsistence-farming community in which money could generally be earned only if it was sent home from abroad, there was plenty more progress to report, especially in terms of basic needs.

In 2005 a few mobile phones were already in use in the village, though their owners had to travel to newly electrified Garango to charge them. So my return in 2016 was not as much of a voyage in the dark as on previous occasions – I was able to text Mariama in advance to let her and others know that I was on my way and exactly when they could expect me to arrive. 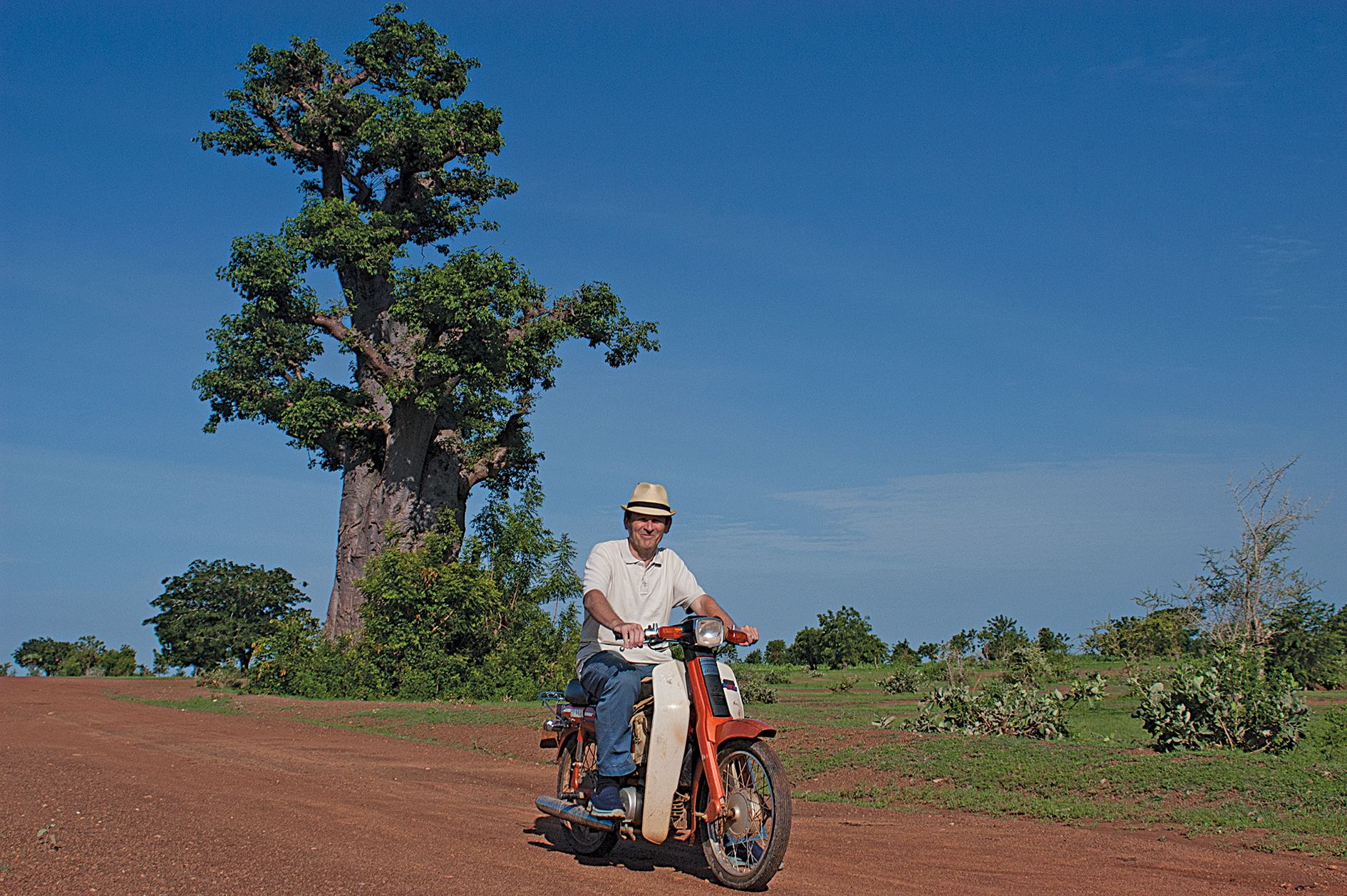 Not so easy rider, with baobab backdrop.
Photo: Pat Tope

All the same, I am on tenterhooks as to what I will find in the village as I make the perilous journey on the motor scooter across one of the marigaux (seasonal streams) that has broken the road down in this period of the rains. The brand-new road branching out from the tarmac highway – still a dirt track but flattened and impressively landscaped – peters out a couple of kilometres from the centre of Sabtenga and becomes a much more basic path, subsiding now and then into soft sand (see map opposite).

Having spent so much time in the village in past years, I would have expected to recognize key landmarks and buildings more easily. But every time I have come it has been a different season – from the driest point of the year in 1985 through to the wettest in 2016 – and that makes the landscape look very different. On the other hand, it may be just that my memory is becoming shaky and that my sense of direction is as terrible as ever. But, for whatever reason, I manage to sail right past the health centre without recognizing it before I realize that Ousmane, my old friend from the dispensary, is chasing after me to hail me down.

I am back. What changes will I find in people’s lives this time around?

Map of Sabtenga - and 30 years of change in Burkina Faso