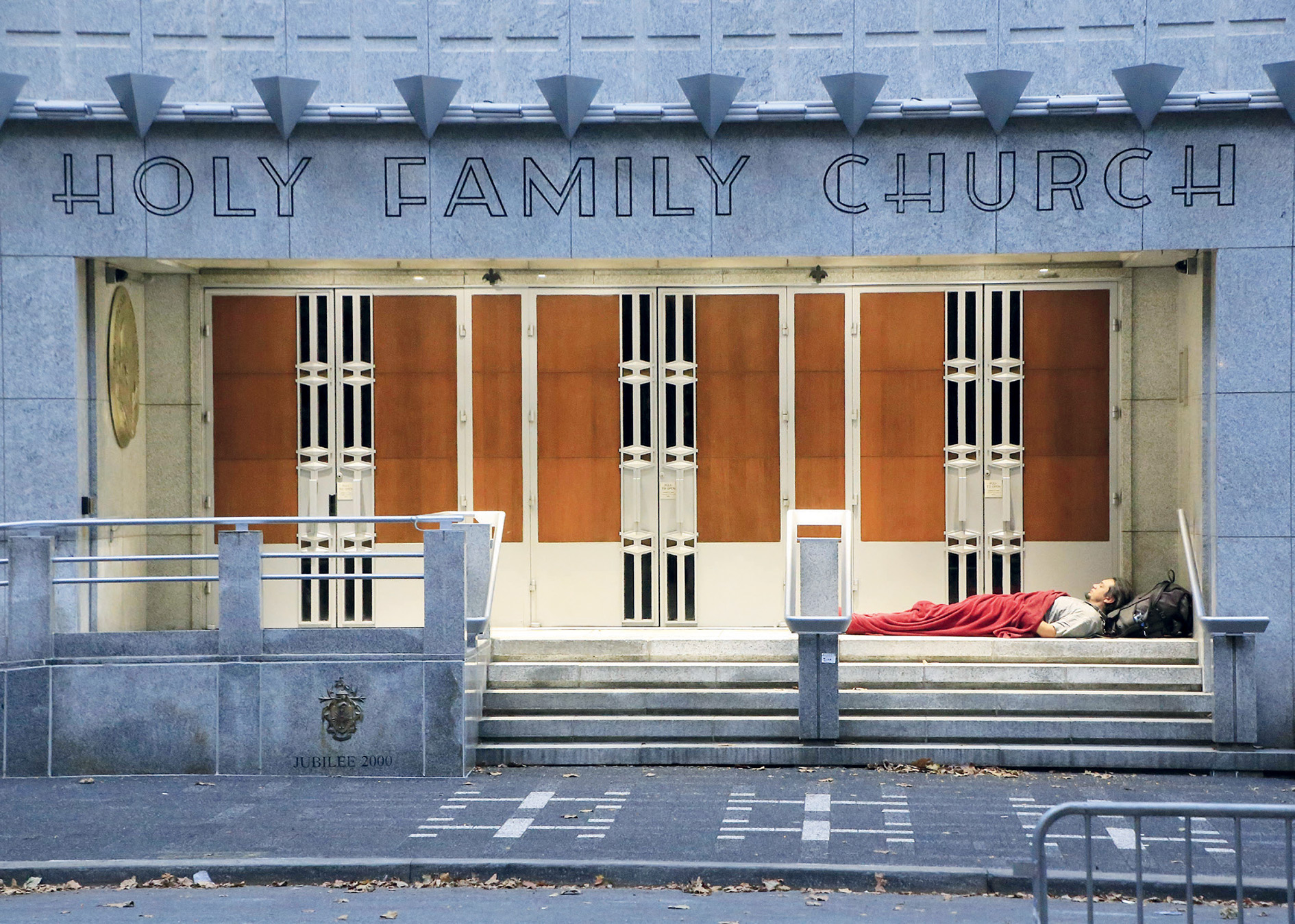 A ‘rough sleeper’ camps out in a church entrance next door to the lavish Trump Tower. Housing First was launched in New York City in 1992. It has now spread across North America and beyond.
Photo: dpa picture alliance/Alamy Stock Photov

‘Our job was to interview people who were homeless and mentally ill and determine if they were a danger to themselves. We took them in – involuntarily. We had to call the police. It was painful work.

‘We also saw a lot of people who didn’t need hospitalization. They were in bad shape and had been out there a long time.’

Tsemberis kept seeing the same faces back on the street – over and over again.

‘It was obvious we needed to do something different.’

He began to ask homeless people what they wanted.

‘They said they needed a place to live. I wasn’t convinced.’

Housing programmes then were geared to folks who were clean and sober. ‘The mindset was that people in acute distress couldn’t manage their own housing.’

‘That’s when I got into the housing business,’ Tsemberis quips.

Armed with a half-million dollar grant, he launched Pathways to Housing. The core idea: housing first. Give the homeless a roof over their head and make sure they have support. Dr Tsemberis and his team enlisted psychiatrists, social workers and nurses. Once people have their own home, he says, ‘you have a better shot at treatment’.

After five years a staggering 80 per cent of his Pathways to Housing participants had managed to stay in their homes – a far higher success rate than the traditional ‘staircase’ model where people transition to a permanent home through a series of steps, proving their worthiness in the process.

A wider study of this approach (now dubbed ‘Housing First’) across 11 US cities had a similar success rate. In addition, healthcare costs shrank and addictions were better managed.

The evidence sparked interest across America. Lloyd Pendleton, a conservative business executive and former head of humanitarian services for the Mormon Church in Utah, was sceptical.

‘I was raised as a cowboy and I have said over the years, “You lazy bums, get a job, pull yourself up by the bootstraps”,’ he told one interviewer.

But Pendleton changed his mind after listening to Sam Tsemberis at a 2003 conference on homelessness. He learned that chronic homelessness was costly. Homeless people have increased interactions with the police, the courts, prisons and hospitals. Giving these people stable housing with support, he found, would simply be cheaper.

Chronic homelessness is costly. Homeless people have increased interactions with the police, the courts, prisons and hospitals

Pendleton launched a pilot in Salt Lake City with 17 of ‘the most challenging chronically homeless individuals we could find’. Two years later they were still in their homes.

Pendleton then led a statewide effort to implement Housing First (HF). In 2015 the state declared an end to chronic homelessness.

The Housing First model has now spread to 20 US cities.

It’s also moved north of the border. In 2008, the the Canadian Mental Health Association (CMHA) began an $80 million study of the HF model. The five-year ‘At Home/Chez Soi’ survey concluded that 75 per cent of Canadian Housing First participants stayed in their homes. Life satisfaction was high and participants said they felt safer.

It was also cost neutral – every dollar devoted to Housing First reduced healthcare, social service and justice-related costs by a dollar. The CMHA study pegged the cost at $10,500-$16,500 per person per year.

The small prairie city of Medicine Hat, Alberta (population 60,000) adopted Housing First in 2009. The Mayor, Ted Clugston, recalls saying ‘some dumb things’ when he first heard about HF. But he soon became a convert. It made financial sense and it’s ‘the most humane way to treat people’. Six years later Medicine Hat had also declared an end to chronic homelessness.

‘That’s not a lot of money to get people off the street,’ says Tim Aubry, one of the CMHA study’s lead investigators and the head of the University of Ottawa’s School of Psychology.

In 2013, Canada’s then Conservative government was so impressed with the results that it committed $450 million to roll out Housing First across the country.

The following year the blue-collar city of Hamilton, Ontario, diverted 65 per cent of its federal homelessness money into HF. ‘Transitions to Home’ (TtH), developed by Wesley Urban Ministries, has been a runaway success. 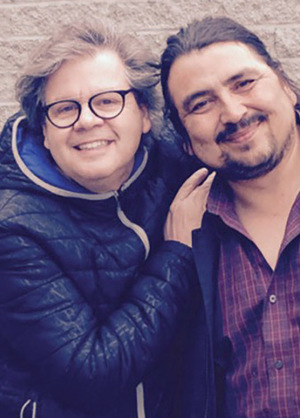 Julia Woodhall-Melnik, co-author of a McMaster University-St Michael’s Hospital study of the programme says TtH allows people ‘to be housed, regardless of other concerns they have in their lives. They are able to fare well, they are able to be stable, and we are able to save money. So it’s kind of a win-win.’

The Hamilton model also includes recreation programmes – like the Homeless Baseball League (so named by the players).

Shaun and Kevin, once among the capital’s long-term homeless, are clearly delighted with their new homes.

‘I love it here,’ says Shaun, 53, recalling what it was like being homeless. ‘When you are cold, it’s a bitch trying to get any sleep.’ As a youth he’d been in gangs and spent long spells in prison for robbery. He became homeless after being released from prison in the early 2000s.

A recovering heroin addict, he takes his methadone treatment in the privacy of his home and no longer has to worry about it being stolen. He credits the Salvation Army with help in finding a home – near his parents – and their support to help him get back on his feet.

Four years ago, Kevin lost the use of his left shoulder after a stroke, which his doctor told him was the result of decades of heavy drinking. He quit but found himself homeless while suffering from memory problems.

Last November, he met Rolly de Montigny,a case worker with the CMHA. A month later he was in a one-bedroom home with his son Gage who suffers from a brain injury.

Kevin said that it was important for him as an indigenous person to be near the river – but also within walking distance of the city centre.

‘I love him, Rolly, man! He’s in my family now,’ he says of Rolly, standing in the kitchen.

Rolly is currently trying to help Kevin get disability income. He also helps him meet appointments and gives him a lift to the local food bank.

Demand for affordable housing outstrips supply in Ottawa. Rent for a small apartment costs around $600 a month. Mike Wade of the Salvation Army, says it’s a challenge to find housing his clients can afford – even when the city tops up government assistance. Tim Aubry and other frontline workers say the housing allowance should be increased.

Both Shaun and Kevin are living below the poverty line. But Housing First can’t prevent poverty.

Sam Tsemberis says the answer lies in addressing the widening income disparity between the richest and the poorest.

‘Where wealth is concentrated in the hands of a few, where rents are high and wages are low, more people will be left out.’

Homelessness will persist until attitudes change. ‘The extent to which we as a society have allowed ourselves to walk past a homeless person means we have lost a part of our humanity. A natural response is to get upset. But there is a solution. We don’t have to tolerate this.’

Sian Griffiths lives in Ottawa. She is a freelance writer and volunteer with the Salvation Army homeless programme in her city.