Will Google take over the classroom?

Silicon Valley types say that with enough data, they can ‘fix’ education. Where are the teachers in this grand plan? asks Tamasin Cave. 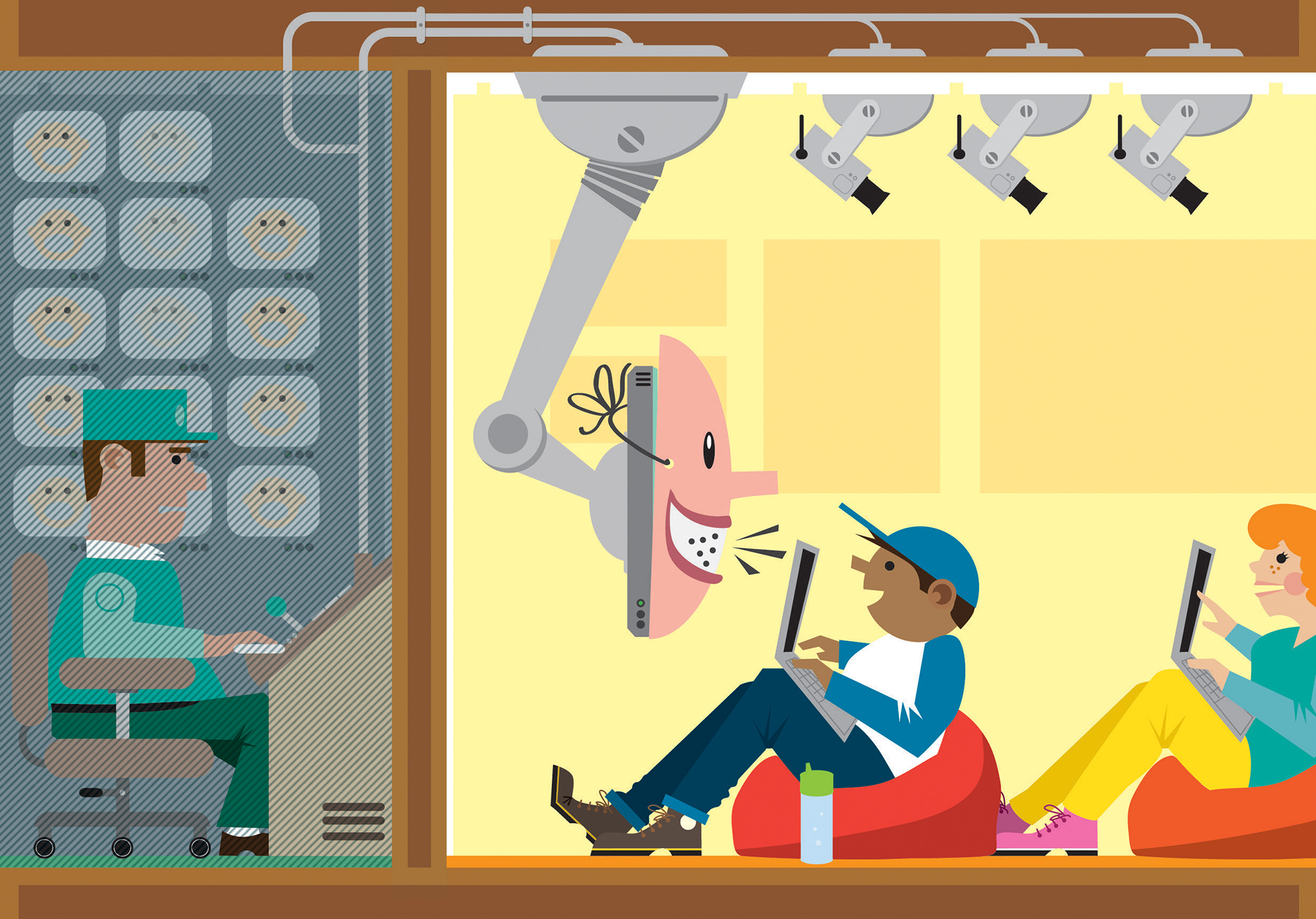 ‘We look at education technology as one of the great hopes of the British economy.’

So said Liam Maxwell, digital czar to the British government, at the inaugural Global Summit of the edtech industry late last year.1

‘When I say “open door” I mean it,’ he stressed to the audience at London’s City Hall. ‘We have an open door on policy.’

November’s celebratory summit was sponsored by Google and had no fewer than five UK government departments represented. It showed the scope – and ambition – of the burgeoning edtech industry, a term that covers businesses that produce everything from digital tools for teaching, testing and tracking pupils to platforms and operating systems on which whole schools are run.

Britain is betting on education as a growth opportunity for its technology industry – and it is not alone. Edtech is now a global trend. The US has set the pace, but countries as disparate as New Zealand/Aotearoa, Chile and India are also pushing their edtech industries. Australia is another that has plans to use technology to significantly increase its share of the global education market.

Global spending on education is currently around $5 trillion, yet only a tiny fraction is delivered digitally.2 It is, in Maxwell’s words, a ‘target-rich opportunity’. It hasn’t gone unnoticed, for example, that ‘51 out of 54 African countries are committing huge amounts of money to the use of edtech and ICT [information and communications technology] in their education reform programmes’, as another civil servant at the Summit noted.

Three months later, these same government departments were duly going all out to promote Britain’s edtech offering at the Education World Forum, at a conference centre opposite Parliament. Another joint venture between government and industry – this time led by tech giants Microsoft and Hewlett Packard – it hosted education ministers from more than 80 countries to discuss future policy, mostly in private, including ways to encourage teachers to get on board with technology.

Ministers were then ferried across London to sample first-hand the technology that promises to fix their school systems and transform education, at BETT, the UK’s major edtech trade show.

The global edtech lobby tells a great many stories about why technology must be used to ‘transform’ education: how it will equip children with vital 21st-century skills; solve the problem of pupil disengagement; increase equality; ‘personalize learning’ in ways never seen and free up valuable teacher time.

The world’s elite, including some of its richest men – Bill Gates, Mark Zuckerberg and Eric Schmidt – are all edtech champions; Amazon’s Jeff Bezos is a fan, as is eBay founder Pierre Omidyar and fellow billionaire Michael Bloomberg. Rupert Murdoch invested (and lost) hundreds of millions of dollars on a plan to transform failing education systems through digital learning.

These elite conversations around the ‘Future of Education’ are conducted almost entirely without input from teachers (and very rarely pupils and definitely not parents). Instead, techno-reform is something that is done to the profession. It is communicated to educators (and the public) through hype and marketing slogans – such as ‘personalized learning’ – that are designed to persuade and win support, not open up debates.

While technology – depending on how it’s used – has the potential to enhance learning, there is scant evidence to support edtech’s claims of ‘transformation’. And the potential benefit to teachers and learners is not the driving force behind most of the technology currently entering schools. Instead, as the British government has clocked, the benefits to be had are, in the long term, financial.

Firstly, technology takes school choice and puts a rocket up it. According to radical free-market reformers, choice – think England’s academies programme and US charter schools – is no longer just between competing schools, but also individual digital courses and services. Technology allows education to be ‘unbundled’ in this way, split into its constituent parts, free from the constraints of the institution. This already happens in the US through providers like the Florida Virtual School, the US’s first internet-based public high school. Donald Trump’s Education Secretary, Betsy DeVos, is a vocal supporter.3

Who is in charge here: educators, or the engineers who write the code?

Next, digitization takes the so-called ‘black box’ of the classroom and opens it up to Silicon Valley types who say that with enough data, they can ‘fix’ education. Take the US school chain AltSchool, backed by Facebook founder Mark Zuckerberg and the venture capital fund of Peter Thiel, the Trump-supporting libertarian and founder of data-mining firm Palantir. AltSchool generates vast amounts of data by tracking its pupils’ interaction with technology and a classroom video system. Once the data is captured, says AltSchool founder and former Google executive, Max Ventilla, then ‘you’re able to start to make inferences and suggestions and say, “similar students pursuing objectives like that were really well served by this kind of experience”.’4 Think Amazon, or Netflix – ie standardized customization – for education. But, who is in charge here: educators, or Altschool’s engineers who write the code and make up a third of its employees?

But this doesn’t just apply abroad. With budget cuts in Britain leading to fewer teaching staff, Pearson, the world’s largest education company reports that schools are turning to technology to ‘address the gaps’.5

Allowing edtech reformers into schools could have far-reaching implications.

Yet the problematic issues of standardization, privacy, privatization and the potential de-professionalization of teachers rarely make it into an edtech keynote, let alone beyond the walls of the conference centre and into public debate.

Teachers, on the other hand, are a hot topic. The edtech brigade can’t stop talking about teachers, who are still, to a large extent, the gatekeepers to the classroom.

‘Many ministers will tell you that teachers and parents are the problem,’ said the influential Andreas Schleicher of the OECD to ministers at the Education World Forum. But, he added, ‘real change will not happen without teachers’.

This is a constant refrain. Teachers, previously seen as blockers to reform – too old, too risk averse, too technophobic – are now the solution. The edtech industry has gone from bemoaning to wooing the profession with stories of what technology can do for them.

‘Let’s not make this a story of job losses,’ says Schleicher, even as he notes that many of the job functions of teachers have already been ‘outsourced to history’. It’s about opportunities, teachers taking on new roles as ‘creative designers’, Schleicher suggests. It’s about freeing up teachers to do what they do best, which is ‘around social relationships’.

The industry is treading very carefully. ‘Changing teaching is hard,’ says Google in a presentation to its own gathering of global education leaders at its Mountain View HQ. ‘Start by saving teachers a little bit of time,’ it says and ‘they’ll be willing to try a lot more’. Make no mistake, though. ‘We are asking them to completely rethink their role.’6

We are told that this is about improving the lot of teachers, not about that $5 trillion, ‘target-rich’ market opportunity.

But the worry is, if government and industry continue to dominate this conversation, tech-reform will end up benefiting edu-businesses far more than the children in the classroom.

Tamasin Cave is a researcher at SpinWatch and co-author of A Quiet Word: Lobbying, Crony Capitalism and Broken Politics in Britain (Vintage, 2015).