Between a shark and the deep sea

Can a US chain of profit-making schools really help the poor? Patience Akumu reports on the impact of Bridge academies in Uganda. 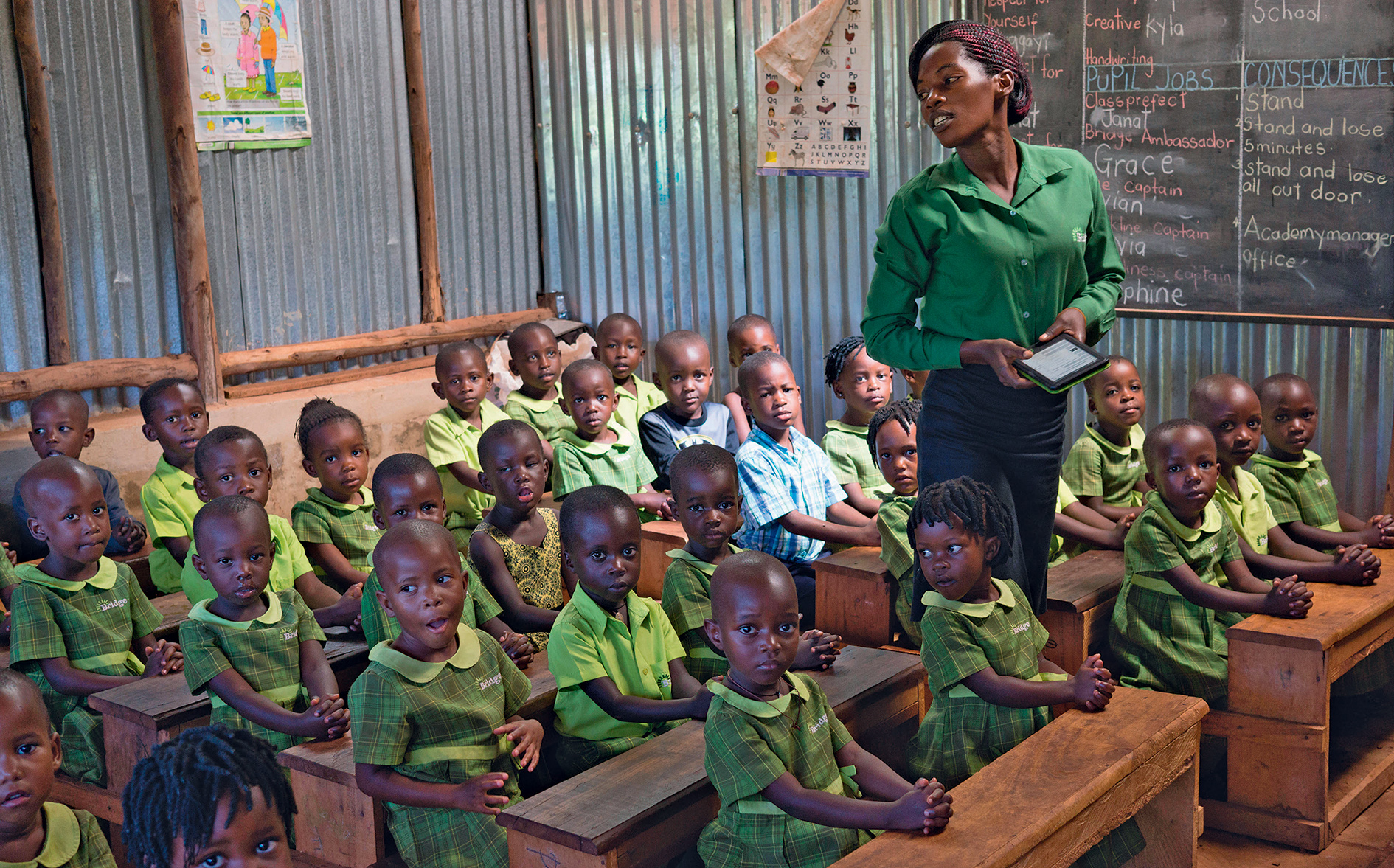 Education by e-book? A teacher and her class at low-cost private school Bridge in Mpigi, Uganda.
Photo: Jon Rosenthal/Alamy

Mention Bridge International Academies and the wrinkles on 70-year-old Veronica Akumu’s face relax, bringing a smile to her lips. Of course, she knows the Bridge school near her village in Tororo district, Eastern Uganda. Had it not been for Bridge, she says, her five-year-old grandson, would not be speaking English in the pristine way he does. He would be like her other grandchildren who went to the nearby government school and can hardly write their names.

Akumu struggles to raise several grand-children, many orphaned by HIV/AIDS, and feeds them off land that is exhausted, thanks to erratic rains. She is exactly the kind of person targeted by Bridge, a chain of low-cost private schools that operates in Africa and Asia. It professes to give quality education to children of low-income earners, the rural and urban poor who find a way to send their children to private schools – even if it means going hungry.

And that is the quarrel education activists such as Salima Namusobya, head of Ugandan NGO Initiative for Social and Economic Rights (ISER), have with Bridge and similar low-cost private schools – the fact that parents trade everything to afford education whose quality has yet to be proven.

Bridge is not shy to shout about its success in bringing what it considers quality, affordable education to under-served families. A high-profile operation, it has attracted over $100 million in investment from the likes of Bill Gates, Mark Zuckerberg and other philanthropists, as well as international donors.

Its model is predicated on scale. Bridge beams out standardized lessons, devised in the US, to its 500 or so schools around the world. The lessons are read off, word for word, from e-readers by teachers, often high-school graduates without formal teaching qualifications.

With an investment of about $3 million, Bridge has built 63 schools over two years in Uganda alone, and runs a sophisticated marketing operation. From Liberia to India, stories abound of contented parents and children achieving amazing results beyond their dreams.

But critics say it is too early to measure the success of Bridge schools, which have existed for less than a decade. In most countries, including Uganda, there is yet to be one entirely Bridge-educated cohort to sit national exams. Bridge’s own, internal studies register high scores, but the system has so far proved resistant to external monitoring, and criticism in general. An independent researcher in Uganda was arrested at the request of Bridge last year. (Over in neighbouring Kenya, Bridge is suing the National Union of Teachers for defamation.)

Besides, Namusobya explains, uneducated parents like Akumu, are not always best placed to judge the quality of their children’s education.

‘They will tell you that their children speak English, but there is great value in teaching young children in their mother tongue language. Also, education is beyond numeracy and literacy, it is about the whole being. There has been no fair assessment, no evidence that Bridge schools are providing wholesome education,’ Namusobya says.

While Bridge says that educating a child costs parents on average 5 per cent of their household income, a 2016 report by Education International, a federation of teacher unions, worked out that parents spend closer to 25 per cent of their income educating one child at Bridge.

‘They should stop describing themselves as low cost,’ says Namusobya. Bridge schools charge about $7 dollars a month but with other costs such as uniforms and materials, it can rise to over $15.1 ‘Also, they never set up in places where people are really poor or where there are no schools at all. They go to places where people have some money to sacrifice and where there are already public schools.’

Namusobya is also sceptical about Bridge’s highly automated system. ‘Teachers are not comfortable with the things they are talking about – faraway places that they have never been to,’ she says. ‘They tell us that the script leaves them no time to explain. Sometimes in rural areas, teachers need to explain in the local language but this is not possible.’

Bridge appears to have strained relationships with East African governments. Last November, the Ugandan High Court ordered the closure of all Bridge schools for failure to have a school licence, unsanitary conditions and unqualified teachers. Bridge appealed, and was overruled again in August. It rumbles on. Kenyan Courts have ordered the closure of 10 Bridge schools for not ‘meeting national education standards’.

Parents have protested passionately to keep the schools open. Victoria Achieng, 26, whose six-year-old nephew goes to Bridge school admits the buildings are basic but is quick to point out that they are better than some government schools. She is weary of what she sees as a government intent on entrenching its rule rather than giving people the basics like a decent education.

‘Pick out any pupil in primary four at any government school and put him or her alongside my nephew at Bridge and you will see the difference,’ she says confidently.

It’s no surprise that parents who can afford it, have opted out of the public education system. Universal primary education (UPE), introduced in Uganda in 1996, should have given more poor people a chance to get an education and better life. But UPE is grossly underfunded and mismanaged. In 2015, the government spent $2 to educate a child through the entire school year, a figure unchanged since 1997. Teachers miss up to a day’s work a week, costing Uganda millions for paid services that are not delivered. They often prefer to spend time in their gardens or running side businesses, such as bodabodas (motor-cycle taxis), to supplement their salaries, which are among the lowest received by public servants. Close to 70 per cent of Ugandan children do not complete primary school, one of the highest dropout rates in the world, according to UNESCO.

For many parents, it is easier to take a child to Bridge than to demand that the government fix the inadequate public education system.

‘Where else would the children in Bridge be?’ asks Achieng, her face breaking into a subtle sneer. ‘The government schools do not teach but they want money, almost the same amount as Bridge. Bridge wants money and teaches. We are between a shark and a deep sea here.’

Namusobya insists that private schools such as those provided by Bridge are part of the problem rather than the solution. Even if they ultimately proved to be better quality, over the long run, they will only deepen inequality. Meanwhile, the government is diverting valuable public resources towards regulating errant private schools.

Bridge insists that they are now co-operating with the Ugandan government. The company has promised to revise the curriculum, employ qualified teachers, and improve infrastructure to comply with regulatory standards. But will this be enough? Namusobya worries that Bridge is selling an illusion.

‘In the developed world, where Bridge founders are from, they would never accept schools such as Bridge. But they are here selling us the lie that quality education can be cheap. Education is not cheap: it requires investment and our governments have a duty to make this investment,’ she says.

Patience Akumu is a freelance journalist based in Kampala.

Will Google take over the classroom?
Fatal attraction