While the world’s largest coal mine gets the go ahead…

With the Great Barrier Reef and climate targets under threat, Tom Anderson and Eliza Egret explain why this mega mine matters to all of us. 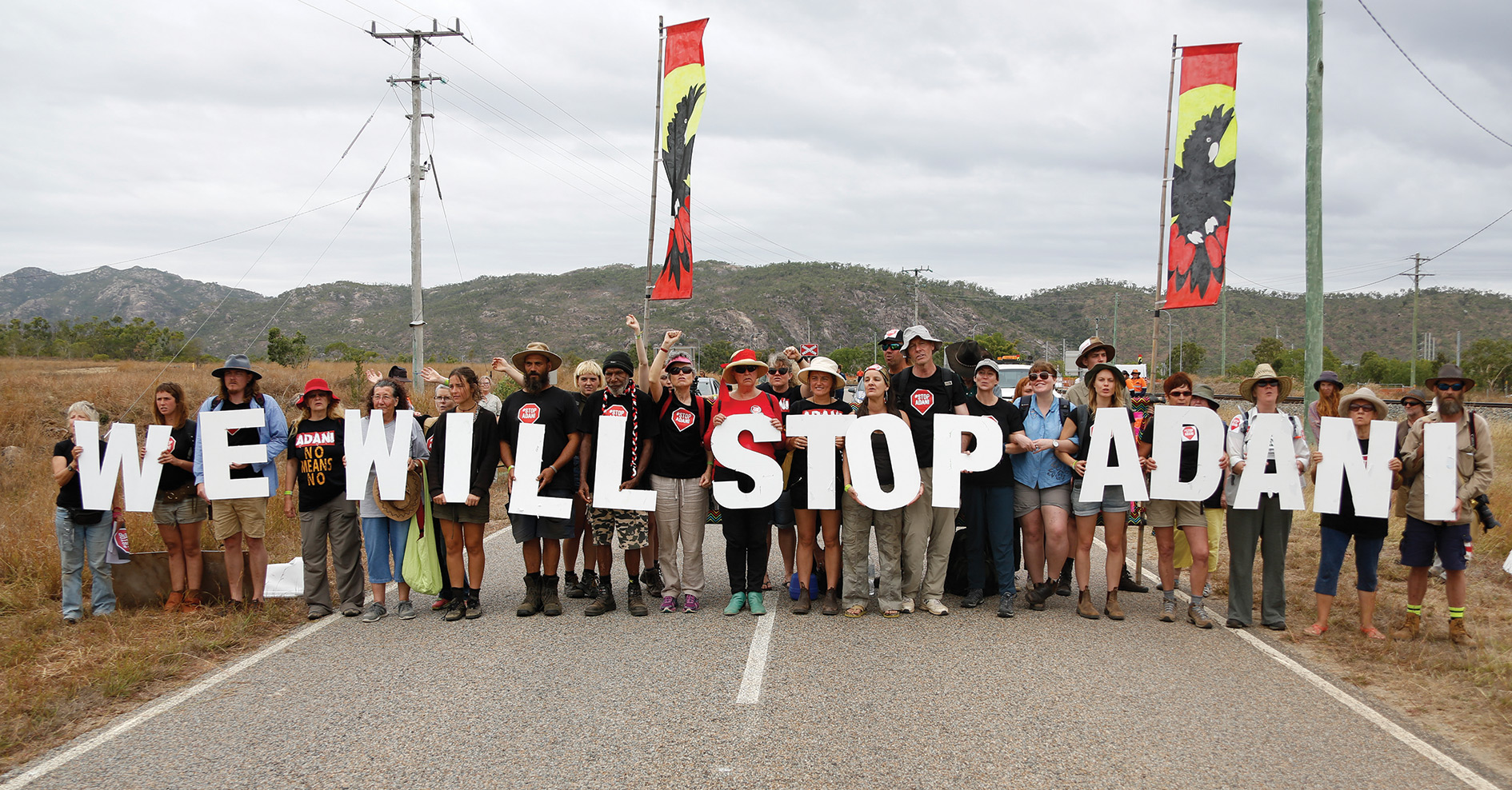 Australia is already the world’s biggest exporter of coal. Now the Queensland Government has made plans that will double its output – by opening up the remote Galilee Basin to mining.

The Carmichael mine planned for north Queensland will be the country’s largest ever, and among the biggest in the world.

If the project goes ahead, the mine will release an estimated 4.64 gigatonnes of CO2 over 60 years and extract up to 60 million tonnes of coal per year. At least eight more mines in the Galilee Basin may follow, which could double Australia’s total exports of coal.

Adani, the Indian company behind the scheme, plans to export most of the coal back to India via a specially constructed railway line running from the Galilee Basin to Abbot Point coal port – located on the Great Barrier Reef. Hundreds more coal ships would populate the Reef’s waters, and more than a million cubic metres of seafloor would be dredged for the port’s expansion, damaging the fragile aquatic ecosystem.

The mine will release an estimated 4.64 gigatonnes of CO2 over 60 years and extract up to 60 million tonnes of coal per year. At least eight more mines in the Galilee Basin may follow

Australian opponents of the project are calling the campaign against the mine ‘the fight of our times’. According to Greenpeace, the plan to construct nine mines in the Galilee Basin is one of 14 global mega-projects that, if successful, will trigger a ‘carbon bomb’, increasing greenhouse gas emissions (GHG) by 20 per cent and causing a 5-6°C rise in global temperatures. The Carmichael project alone would produce enough GHG emissions that 200 such projects would exceed the threshold scientists say could avoid a 2°C rise.

‘Adani’s massive coalmine will lead to more extreme weather and accelerate the warming of the world’s oceans and the destruction of its coral reefs,’ said Imogen Zethoven of the Australian Marine Conservation Society. ‘A quarter of the world’s marine life depends on coral reefs for at least part of their life cycle and 500 million people depend on coral reefs for their livelihoods.’ The mining project may also drive the black-throated finch to extinction and will threaten many other species.

Despite all this, Adani is set to receive strong financial support from the government in Australia. They will not be charged for the potential billions of litres of water the mine will use each year. Adani is also in negotiations for A$1 billion dollars’ ($780 million) worth of government loans. Many Australians are asking why their government is subsidizing a billionaire, Gautam S Adani, who is implicated in multiple corruption scandals.

The project may also greatly impact the economics of coal. Globally, the price of coal is dropping and according to financial analyst Tim Buckley, ‘in a market where demand for seaborne coal is declining, to add supply will only accelerate the price decline’.

One possible scenario is that this combination of falling coal prices and increased supply may tempt governments to invest in coal instead of renewable energy. However, even if the projected price-drop does not slow the transfer to renewables, the construction of the Adani plant still flies in the face of science: global energy consumption has to decrease dramatically to avert catastrophic climate change.

Australian law permits a limited number of First Nations people, who hold what is legally referred to as ‘Native Title’, to negotiate new projects such as mines on their land. Yet, consultations over the Adani project have clearly shown how this process is manipulated in favour of mining companies.

‘Most people didn’t get the right information [on which] to base their decision,’ says Ken Peters-Dodd, an elder of the Birriah people in northeast Queensland, which lies along the route of the planned coal railway line.

‘You had a minority of people only in it for financial gain – influencing the meetings in favour of the mining company. Expert advice to inform this process was done internally by the company. Our family walked out in disgust.

‘The Adani project will have an impact on the environment, our cultural heritage and our rights as caretakers and custodians of our country – for generations to come,’ says Ken.

‘Adani is destroying everything that’s spiritual to us,’ adds Carol Prior, an elder of the Juru people, whose land will be the site of the port and railway for the project. Carol was part of the negotiating process with Adani, but had been voted off the group after she raised concerns, which include damage to her people’s cultural heritage, burial grounds, ancient rock art and ochre grounds.

‘Our rock art is as if our ancestors wrote
a letter and left it there for us,’ she says. ‘It
tells us: “This is where you come from and
this is where your spiritual connection is.
This is your country”.’

Carol and Ken, along with other First Nations people, are at the forefront of the campaign against Adani, working to show that the project, according to Ken, ‘does not have the consent of Aboriginal people’.

In June, the Federal Parliament passed an amendment to Native Title law, permitting Adani, and other companies, to go ahead with a majority, rather than a consensus, of those involved in negotiations. This has been met with massive opposition from First Nations people in Australia. According to Ken: ‘In our law we should get a final decision that supports everyone’s consensus.’

‘When they changed Native Title, they tightened the chains,’ says Carol. ‘The bondages of slavery are still there.’

Legally, Adani’s mine should not be able to proceed until a further court challenge by the Wangan and Jagalingou people is ruled on.

Ken believes international solidarity is important for the struggle. ‘We ask people from around the world to support us. We need to pull together and plan for the future,’ he says.

Through concerted grassroots action and protest, campaigners against the Adani mine have already been successful in persuading the major Australian banks – and many international financial institutions – to withhold finance from the project.

In order to go ahead, Adani will need the support of a network of financiers, lawyers, insurers and engineering and construction companies. Many of these are international, so grassroots movements all over the world will be key to persuading these companies not to back the project.

See here for a list of the international companies involved in the Adani project.

Tom Anderson and Eliza Egret are part of Shoal Collective, a newly formed co-operative of writers and researchers writing for social justice and a world beyond capitalism.