Covid-19: Those most at risk

Husna Rizvi writes that informal settlements and refugee camps are perhaps the most dangerous places of all. 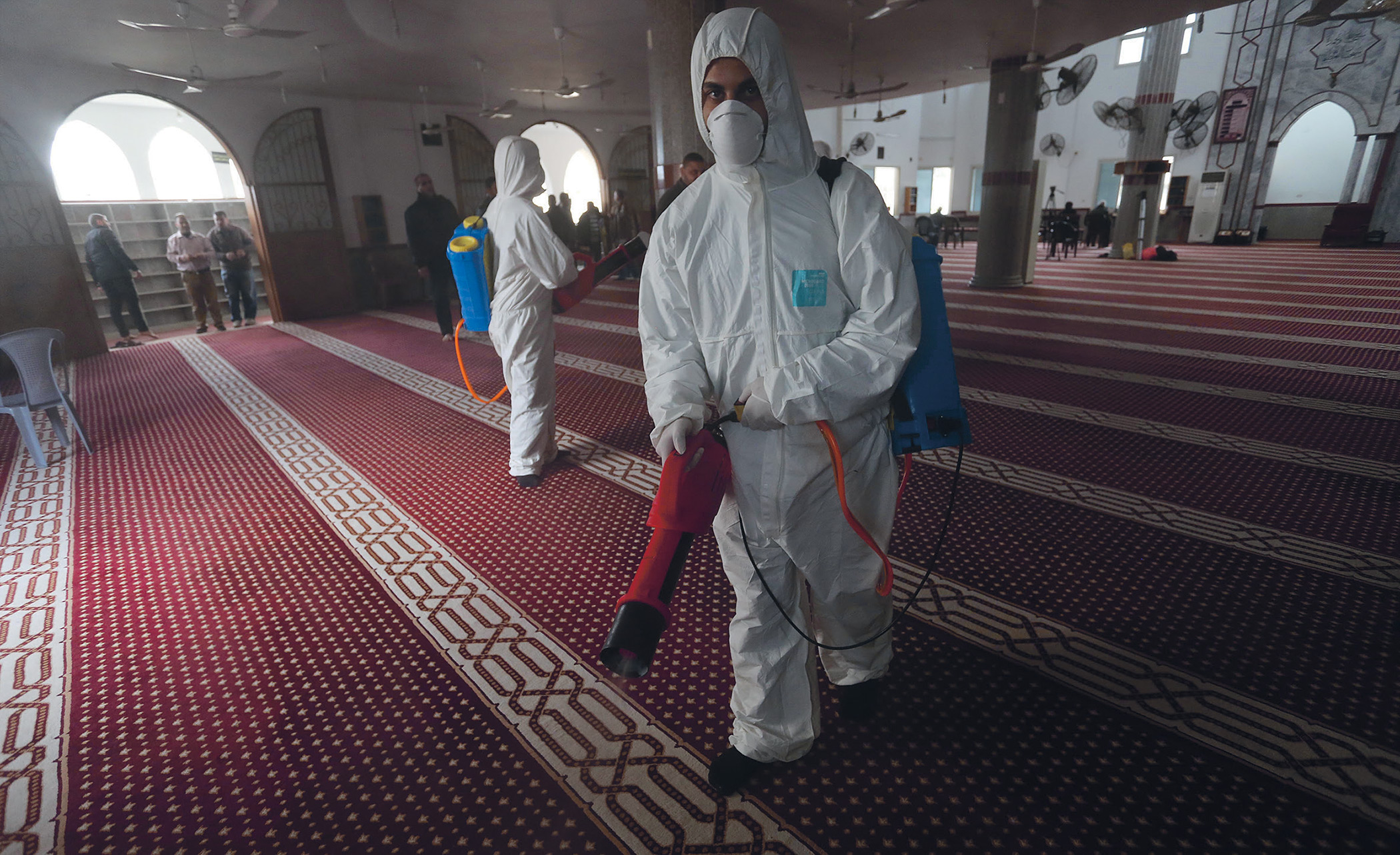 Exit denied: Palestinian workers disinfect a mosque as a preventive measure amid fears of the spread of coronavirus, in Gaza, which is under blockade by Israel.
Photo: Majdi Fathi/Nurphoto/PA

How do you begin to protect yourself from coronavirus when you can’t wash your hands? In 2019, that was true of three billion people, according to Water Aid. It serves as a stark reminder that not everyone is on an equally fragile footing when it comes to facing this crisis.

At the time of writing, Covid-19 had yet to take hold in lower-income countries. If and when the virus spreads, a lack of resources to prevent and treat it, as well as poor access to accurate information, will pose significant obstacles to its containment.

This threat multiplies for those living under occupation. In March, the first cases of Covid-19 were reported in two areas already effectively cut off from the world: Kashmir and Gaza.

Al Jazeera reported that there were 62 ventilators in Gaza – for a population of two million – more than two-thirds of which were already in use, and just two testing kits. Israel’s embargo continues to block supplies coming in and out of Gaza and offers no passage out for the sick.

Kashmiris are subject to a communications blockade that cripples the internet. ‘This is so frustrating,’ Iqbal Saleem, a professor of surgery at Government Medical College in Srinagar, wrote on Twitter. ‘Trying to download the guidelines for intensive-care management as proposed by doctors in England. 24 Mbs and one hour. Still not able to do so.’ Neither residents nor doctors can keep up to date with developments or news on how to treat it.

For the world’s incarcerated populations, the risks are even higher. ‘Prisons are Petri dishes for this pandemic,’ Carl Cattermole, author of Prison: A Survival Guide, wrote in Freedom News. ‘Overcrowded, understaffed, completely filthy, full of vulnerable individuals without the agency to self-isolate.’

Many analysts note that informal settlements and refugee camps – where isolation is also impossible – are perhaps the most dangerous places of all. Asia Times used the phrase ‘ticking timebomb’ to describe Kutupalong in Bangladesh – believed to be the world’s largest refugee camp, and home to over 630,000 Rohingya people. The same applies to those displaced by war in countries such as Syria, South Sudan and Yemen.

Even in places where people in the Global South are able to self-isolate, the threat of losing out on work – especially for daily wage labourers – will likely trump health concerns. As Delhi-based drinks seller Mohammed Sabir – one of at least 90 per cent of the Indian workforce who is employed in the informal sector – put it to the BBC: ‘Hunger may kill many like us before coronavirus.’

But the right global response can still protect the vulnerable from both the virus and the draconian measures in place to stop it. The rich world should dig deep to help the Global South, via funding, debt write-offs and equipment. And all policies, in the words of the grassroots #Just Recovery campaign, should: put people’s health first, no exceptions; give economic relief directly to the people and help workers and communities – before shareholders and corporations.