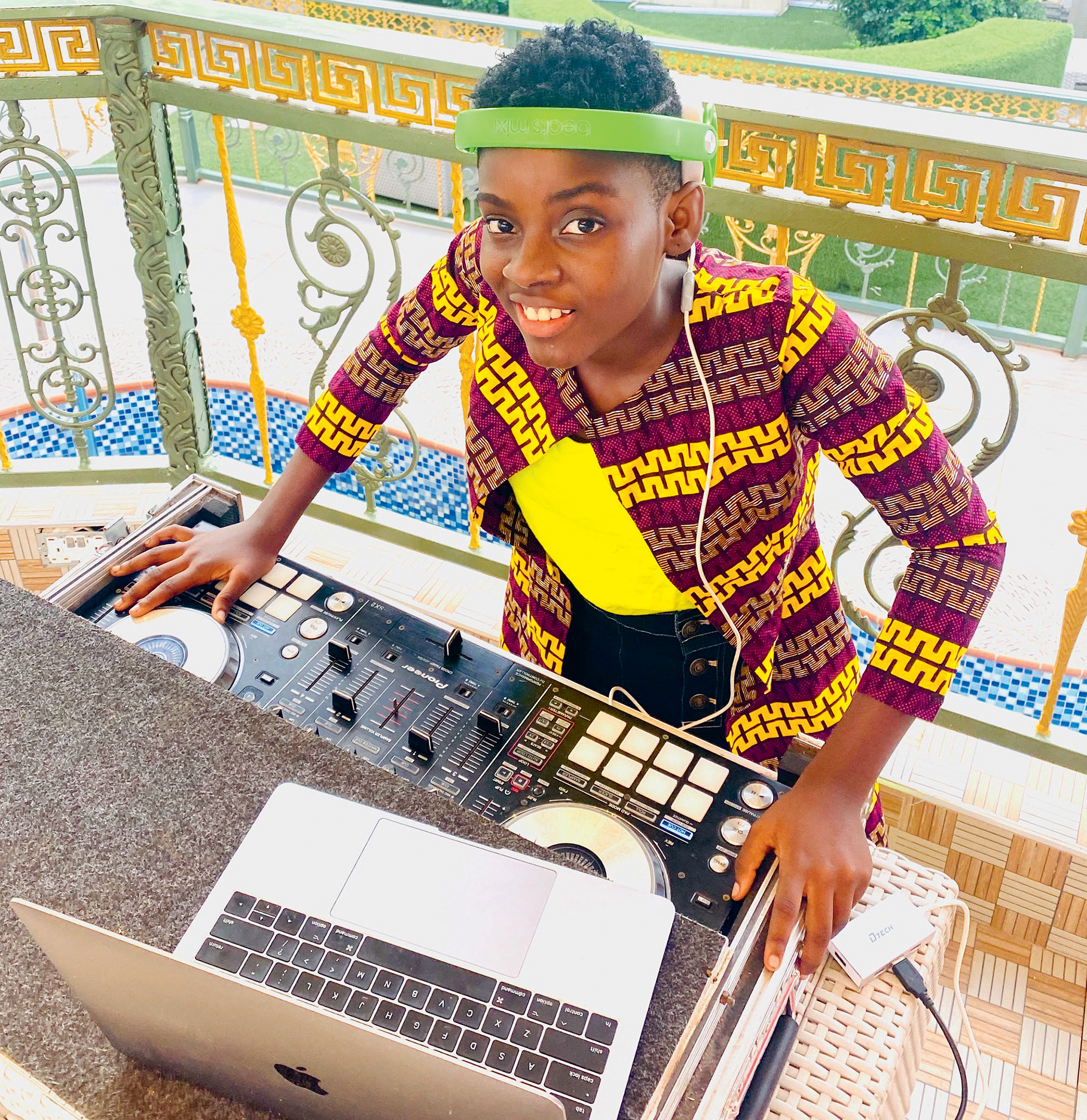 I’m in London, in a taxi on my way to interview 13 year-old Erica Armah-Bra Bulu Tandoh, aka DJ Switch. Covid restrictions on travel mean this has to be done via studio link rather than in person, as Erica is at her family home in Ghana.

The taxi driver tells me his name – Adjo. He came to the UK from Ghana in the 1990s, returning every year to check on his farmland and to see his elderly aunt. When I mention DJ Switch, his eyes light up. ‘I know of her! She is very famous in my home country. So talented and she does a lot of good work in girls’ education. Tell her we bless her and pray for her.’

DJ Switch was just 10 years old when I first met her in Vancouver where she was performing at the Women Deliver Global Voices Conference. She also gave a speech on girls’ education and healthcare for her not-for-profit organization, the DJ Switch Foundation. I was struck by how grounded she was, unphased by all the attention.

When I invited her mother Lilian to sit in on the interview, she just laughed: ‘I’d better not – Erica hates it when I interfere!’

Fast forward three years and Erica is much the same and, despite having won many prestigious awards for her DJ’ing both in her country and abroad, still very much focused on the DJ Switch Foundation.

I ask how the DJ’ing is going. ‘It is so good! When I am playing and I see the audience dancing and laughing it just lifts me so high. I love all types of music and mix Pop, K-pop, Country and other genres… When it comes to African genres we have the Afrobeat, South African music, Ghanaian music which has its local styles: Highlife, Hiplife, Old School, and Ghanaian Trap which fall under Hip Hop.’

She started out as a performance poet ‘because I like writing my own words and reciting them’ in her own local community Suaman Dadieso, North West Ghana. Then she got into mixing music, winning a Talented Kids Competition on TV3. This led to her getting offers to work as a DJ. She caused quite a stir when she burst onto Ghana’s music scene, aged only nine, winning prizes against much older male DJs. Some were not too happy about being ‘usurped by a little girl’, she says.

She caused quite a stir when she burst onto Ghana’s music scene, aged only nine, winning prizes against much older male DJs. Some were not too happy about being ‘usurped by a little girl’, she says

‘I will never see what I am doing as competition. I see myself as winning awards in order to do something good. It’s like with the Foundation, when we raise funding to provide a school with desks and chairs so the children do not have to sit on the ground, or we supply nutritious school lunches or extra lessons on the importance of good health and hygiene. For me that is a win, it means I achieved a task I set for myself.’

Her foundation is working to eradicate so-called ‘child marriage’. Sub-Saharan Africa has the highest maternal mortality rate in the world – 533 maternal deaths per 100,000 live births, or 200,000 maternal deaths a year, according to UNICEF. This is over two thirds of all maternal deaths per year worldwide. Research carried out by the global charity Too Young To Wed found that girls as young as 10, who had been subjected to female genital mutilation, are dying in childbirth due to lack of appropriate healthcare and because their already mutilated bodies are simply not mature enough to bear children.

Erica tells me she wants to be a gynaecologist when she is older because ‘there are not enough doctors to help these girls’.

She continues: ‘We must have educational talks across the globe explaining the rights of women and girls in order to cease all these bad practices. Children are easily swayed into harmful practices because they cannot read and understand that they have rights.’

To this end, she is launching a new project through the foundation called ‘Community Reads’, buying and collecting what she calls ‘every kind of good reading material which will help children my age and younger to read. Then I will go with my team to distribute these materials to schools in remote villages.’

Adjo, the taxi driver, is waiting for me. He tells me he didn’t want the taxi firm to send a different driver as he wanted to know how the interview went. ‘Of course, she can be a DJ and a gynaecologist,’ he laughs. ‘All Ghanaians have two jobs! Look at me, I am a farmer and a taxi driver! Yes, I think she can do whatever she wants.’