Letter from Bangui: Our trespasses

A hold-up at the airport sets Ruby Diamonde to thinking about the state of siege under which Central Africans have to live. 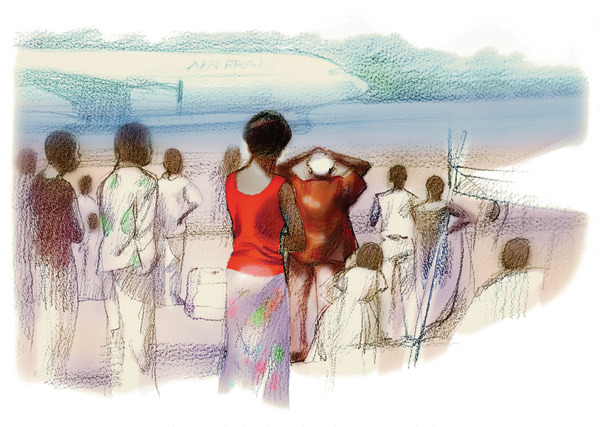 Travelling around the Central African Republic (CAR) is a risky business. And so is travelling the few kilometres from Bangui city centre to the diminutive M’Poko international airport, just north of the capital.

The districts around M’Poko airport – such as Combattants, Galabadja and Fou – have seen some of the worst violence in Bangui these last months, with militias targeting either Christian or Muslim communities, and deliberately shattering trust between the two. Businesses and homes have been looted, sometimes burnt to the ground; families have endured lynchings and mob violence. As fear between Christians and Muslims has spread like a virus, churches and mosques have been attacked and desecrated.

Some 6,000 international troops, who arrived back in December from France and the African Union countries, have not been able to stem the erupting street violence. Up to another 12,000 United Nations ‘Blue Helmet’ peacekeepers are scheduled to arrive, but not until September. Hundreds of thousands of traumatized and terrified Central Africans have fled their Bangui homes this year to local monasteries, community centres, and to the fields surrounding M’Poko airport, where vast numbers of them have spent months existing in ragged camps alongside the main runway. A (very) rough recent estimate of the airport camp residents was between 80,000 and 100,000 people.

A few weeks ago, exhausted by my work and the daily bloodshed, and needing a respite from CAR, I booked a flight back to England. Getting to M’Poko airport that morning was, thankfully, relatively easy. At the airport checkpoint, young-looking French troops said ‘Bonjour’, briefly searched the taxi, then waved us through.

Forty-five minutes later I sat in the tiny airport departure lounge drinking a cool beer. Craning my neck I could see the camps backed up to the edge of the runway where my Air France plane was refuelling. I felt weird – gross in fact – to be drinking a beer here, especially knowing that I could leave, but most Central Africans cannot.

I drained the bottle, then joined the queue slowly walking across the tarmac towards our plane. Some people took photos of the camp as we were boarding, we passed that close to it.

Several weeks later, when my flight touched back down at M’Poko airport, the sprawl of camp residents was exactly where I had last seen them. Of course; where else could they possibly flee?

But this afternoon they were not the only people stuck there. There was heavy shooting, including grenade attacks, in the districts around the airport, and the main route into Bangui was blocked.

I was travelling with a woman called Zelda, an experienced aid worker, who has spent years in several different African conflict zones. As we stood in the airport car park surrounded by a huddle of other grim-faced aid workers, Zelda rolled her eyes.

‘What are all these troops doing here if they can’t even secure the route into town?’ she demanded, tossing her cigarette butt to the ground.

Her question, which no-one around us could answer, highlights something that I think everyone knows, but few seem willing to talk about: there is no military solution to the terrible violence here. This country is soaked in small arms; Central Africans, like their neighbours in Chad, North and South Sudan and the Democratic Republic of Congo, habitually use machetes for farming and guns for hunting. Plus, the borders around CAR are like a sieve, with no capacity to control any kind of arms trade. No matter how many UN peacekeepers arrive this year – and many are already saying it will be too late when they finally do – there is no way to strip this country of its weapons.

So, what else can be done to stem the inter-communal bloodshed that is traumatizing an entire generation?

Local civil-society initiatives set up by Central Africans, to kick-start community dialogues and local reconciliations, and to begin rebuilding trust between people living in fear of each other, might sound utterly idealistic amid these festering brutalities in Bangui and across CAR. But these initiatives are a vital seeding of something that can, and is, growing to challenge the violent status quo, and show that life beyond fear and political violence is possible here. As a young Central African activist and friend of mine puts it: ‘This terror is not about religion, but bad politics – and now our politics have to be about us listening and forgiving each other, for what we have all done to each other.’

Ruby Diamonde is a pseudonym