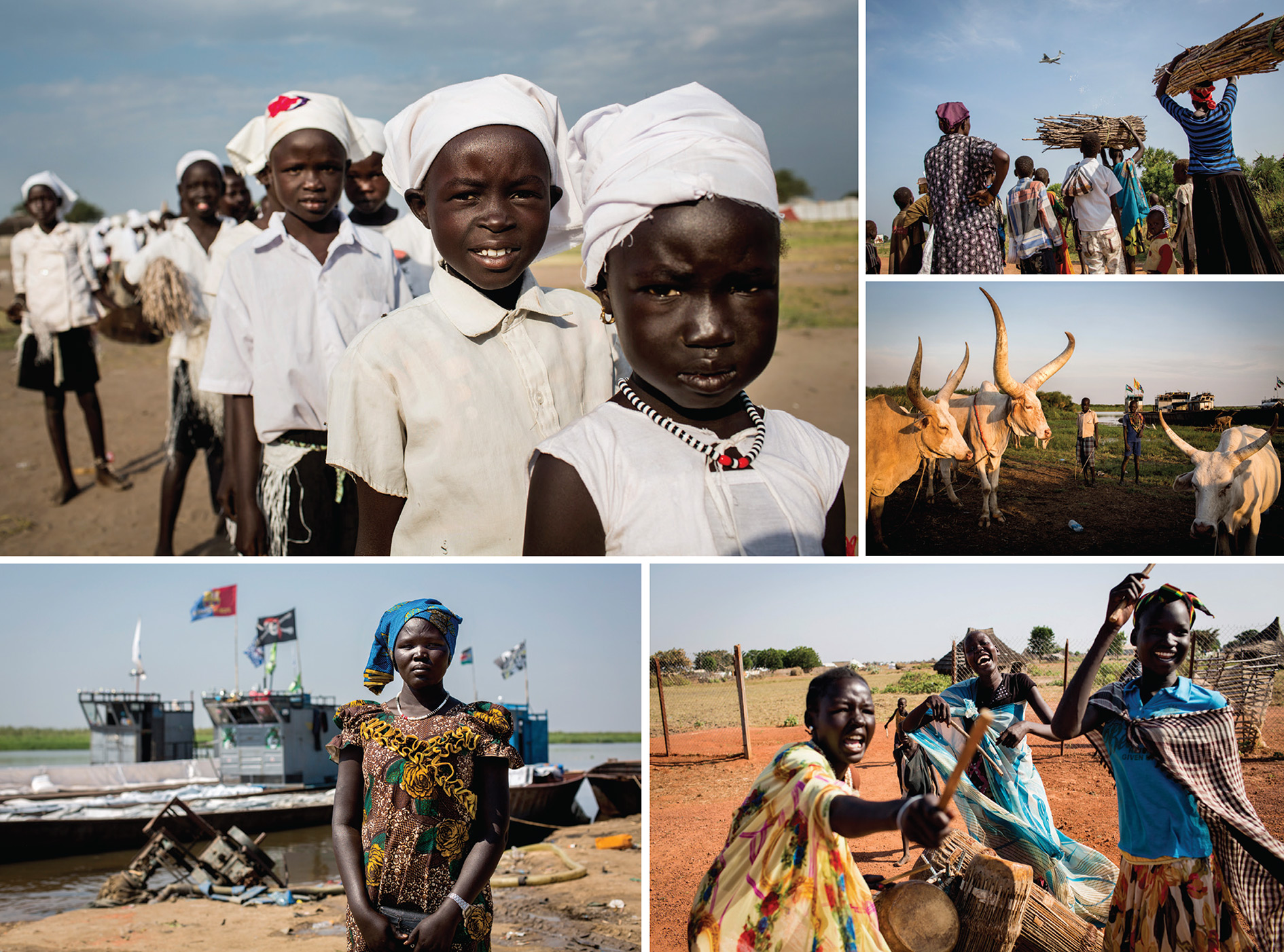 Clockwise from top left: A song-and-dance group prepare to perform at a church in the Mingkaman camp for internally displaced people (IdPs), which has often held as many as 100,000 people during the conflicts of the past few years; villagers in Unity State in the north watch a plane drop sacks of food aid; the boys looking after African-longhorned cattle are also from the Mingkaman camp, in Lakes State; the dinka women drumming have just had a training session aimed at making them aware that gender-based violence is a crime; Amer Agoot is pictured at the river port of Bor, having been forced to flee an IdP camp when men invaded her hut and robbed her of the little she had left.
Photos: Andrew McConnell / Panos Pictures.

The road from Juba airport (one of the few paved roads in the country) is a dilapidated parade marked by unfinished and decayed buildings, which sprung up in the heady days following hard-won independence from Sudan in 2011. Juba itself, once a small trading outpost on the Nile, is now a dusty urban sprawl, teeming with UN personnel, military and motorcades. The marked lack of infrastructure (more notable still outside the capital) speaks to a long history of neglect.

At Sudan’s independence in 1956, the British failed to deliver on promises of autonomous rule to the southern states, which were culturally, ethnically, linguistically and religiously distinct. This opened the door to inevitable conflict. A brief period of stability was heralded by the 1972 Addis Ababa Agreement, which awarded the South the right to self-government. But this disintegrated in 1983 and hostilities resumed, leading to the formation of the rebel Sudan People’s Liberation Army (SPLA), headed by the charismatic John Garang.

Guerrilla conflict raged until 2005, when the Comprehensive Peace Agreement (CPA) was brokered under immense international pressure, promising a referendum in which the people of the South could vote on secession. A few months after the CPA was signed, John Garang was killed in a helicopter accident, leaving his deputy, Salva Kiir, as successor and the peace deal in jeopardy. Western pressure, though, ensured the CPA stayed on track and in 2011 98.8 per cent of South Sudan’s people voted for independence. 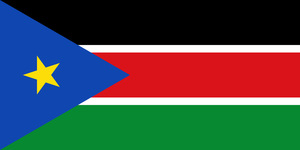 But the CPA did not fully resolve two things: the north-south border delineation (including the disputed and oil-rich Abyei area) and the division of profits from the southern oilfields between the two nations. At independence, South Sudan gained control of three-quarters of the former country’s oilfields but was landlocked, meaning Sudan retained the processing and export facilities. Six months after independence, the government took the ultimately ruinous decision to shut down oil production, in protest against Sudan’s exorbitant transit fees.

At independence, the new country’s military accounted for more than 50 per cent of the national budget – expenditure that was necessary to maintain the loyalty of the complex configuration of ethnic militia that made up the SPLA. Without oil revenue over a period of 15 months, President Kiir was no longer able to manage political rivalries, including a leadership challenge from his vice-president, Riek Machar. The fall-out between Kiir and Machar – the most powerful members of their respective Dinka and Nuer ethnic groups – led to civil war erupting in December 2013.

Atrocities have routinely been carried out by both sides along ethnic lines. Stalled peace talks resulted in a tenuous peace agreement in August 2015 which proposed a power-sharing deal but took over nine months to begin implementation. Prospects of sustained peace were dashed, in July 2016, however, when heavy fighting broke out again in the streets of Juba.

In addition to the tens of thousands killed and 2.3 million displaced, the conflict has destroyed any meagre development gains made since independence. With falling global oil prices, pipeline tariffs, plus interest on debts to oil companies and with donor support redirected to humanitarian efforts, government revenue now stands at next to nothing.

The country is now on the edge of an economic and political cliff – with hyper-inflation and a bloated but soon-to-be unpaid military, further unrest is inevitable. Local reconciliation expert Bernard Suwa has commented: ‘Before the war, the community was strong but now the community is broken.’ South Sudan’s history is one of conflict and poverty but its future looks bleaker still. 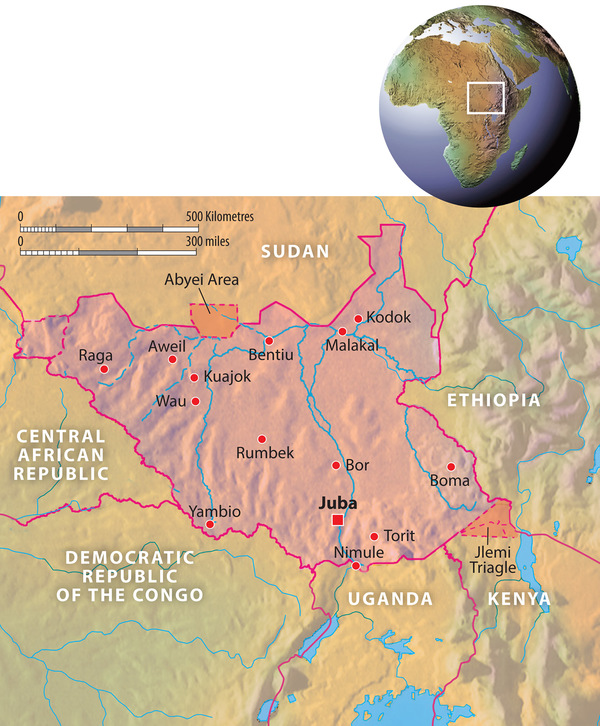 Leader
President Salva Kiir
Economy
GNI per capita $790 – down from $1,060 in pre-independence 2010 (Sudan $1,710, UK $43,430).
Monetary
South Sudanese Pound (SSP)
Main Exports
Oil accounts for almost all of South Sudan’s exports and around 60 per cent of its GDP, with the majority of the population engaged in subsistence agriculture or pastoralism. The fall in the oil price has had a devastating effect, the currency has collapsed and inflation has reached 300%.
People
12.3 million. Annual growth rate 3.0% - the population has almost doubled since 2000. People per square kilometre 21 (UK 267).
Health
Infant mortality 60 deaths per 1,000 live births (Sudan 48, UK 4). An estimated 55% have access to clean water and only 15% to adequate sanitation. Lifetime risk of maternal death, 1 in 26 (UK 1 in 5,800). HIV prevalence rate 2.5%.
Environment
Much of the country is arid, suffering from over-grazing. The White Nile, which runs through the country, swells seasonally, however, to create vast wetlands. CO2 emissions per capita per year, 0.1 tonnes.
Culture
As many as 64 recognised ethnic communities: The largest ethnic group is the Dinka, making up nearly 35% of the total population, the second is Nuer, accounting for almost 16% of the population. Both tribes belong to the larger Nilotic group, which includes other, smaller pastoralist tribes. Sedentary agrarians in the south, include the Azande and Bari.
Religion
Christian 61%; Muslim 6%; traditional African religions 33%.
Language
English (official); Arabic iswidely spoken (including a pidgin ‘Juba Arabic’, spoken in the capital). There are around 80 vernacular languages, including Dinka, Nuer, Bari and Zande.
Hdi
0.467, 169th of 188 countries (Sudan 0.479, UK 0.907).

Income Distribution
5.1 million people – almost half the country’s population – require food assistance, while a small number of elites have allegedly amassed huge fortunes through kleptocratic networks.
Life Expectancy
56 years (Sudan 64, UK 81) – the world’s 11th lowest.
Position Of Women
Women have a prescribed quota of 25% in the executive and legislature. But patriarchy is inherent, indicated by only 33% of girls attending school and a dramatic upsurge in gender-based violence during the recent conflict.
Freedom
140th out of 180 countries ranked in the Press Freedom Index, falling 21 spots in 2 years. Student protests in June 2016 were met with deadly force by security personnel, while the 2016 NGO Bill includes restrictive provisions and alarming government oversight.
Literacy
Estimated at just 27%. 70% of children aged 6-17 have never set foot in a classroom.
Sexual Minorities
Male same-sex sexual activity is illegal and carries a penalty of 10 years’ imprisonment (this derives from British colonial rules in Sudan, which did not mention lesbianism). There is widespread social discrimination.
Politics
Lack of accountability during the decades of war with the Khartoum government has carried over into the new regime. Chronic corruption haunts the world’s newest country. The horrific civil war finds its origins in the competition between rival ethnic elite patronage networks for control of state resources. Both sides in the conflict have actively exploited ethnic divisions and all forces continue to commit abuses with impunity. Meanwhile, the state has responded to the deepening economic and political crisis by restricting civil freedoms.

The kind and the curious
Big Bad World - Onlinenacht