The dictionary of deceit

1 These folks (with assets of a million bucks plus) swing a lot of weight with accountants and tax planners. Most major banks have separate units dedicated entirely to ‘servicing’ them.

2 Together they have caused an estimated 10 per cent of global household wealth to mysteriously disappear from HNWIs’ taxable bottom line.

3 But, hey presto, when they want to blow it on that big wedding or a new plunge pool for the villa in Provence, it’s magically still there.

1 The idea that taxes should have the least possible effect on the operation of that holiest of holies: the market. Although market ‘outcomes’ leave some wealthy and others starving, destroy the environment or reward those who make weapons and war, it is deemed ‘inefficient’ for taxes to ‘distort’ these results.

2 In this world, taxation should be kept as low as possible – zero is optimal – so as not to be an excessive weight on the economy and alter economic decision-making.

1 In a double Irish, corporations ‘book’ income and profits through two separate Irish incorporated companies, one a tax resident of Ireland and the other controlled from, and thus a tax resident of, Bermuda or the Cayman Islands.

2 The second company is assigned lucrative intellectual property rights by the parent company, and then rents them to the first at a high rate. Much of the money that passes through the first company is then passed to the second, where it is subject to no corporate tax, while what’s left is taxed at the low Irish rate of 12.5 per cent.

3 This tax dodge is a favourite with tech giants like Apple, Microsoft, Google and Yahoo, as well as Big Pharma monopolies. If you’re having trouble following this, please see MEGO. 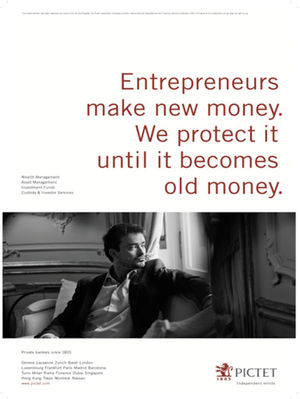 Advertisements like this one from a Swiss bank sound benign enough, but does the 'protection' of wealth include the shielding High Net Worth Individuals from paying their share of essential tax obligations?

My Eyes Glaze Over (MEGO)

1 Coined by US senator Carl Levin, MEGO refers to the complex, tedious language of tax law. For the general public, journalists and even tax scholars, the ins and outs of tax legislation and precedent are so impenetrably difficult that many throw up their hands in frustration.

2 But if you can afford to hire armies of accountants and specialists you can win the tax avoidance game by simply drowning your opponents in an avalanche of boring technical detail.

1 A favourite of Australian mining giant BHP Billiton, the Singapore Sling involves shifting profits from a high-tax jurisdiction to a marketing subsidiary in Singapore. By selling commodities at low cost to a Singapore subsidiary, which then sells them on to end-users at market price, transnationals can claim that any profit is due to marketing rather than the value of the commodities themselves, and that profits should thus be taxed in low-tax Singapore.

1 A grouping of law firms based in tax havens who are crucial in steering HNWI clients through the shoals of the offshore world. These multi-jurisdictional firms are mostly based in UK dependencies like the Channel Islands, the Virgins and the Caymans but have offices all over the offshore world.

2 They also have links to a similar grouping of magic circle law firms catering to City of London clients. They are key figures in making your money invisible to the tax authorities.

1 The term used for the real owners and ultimate beneficiaries of wealth and property registered to anonymous trusts and shell companies in tax havens. Although they appoint professional nominees – often lawyers – to run their companies, the beneficial owner pulls the strings and reaps the dividends.

2 By hiding behind dummy nominees, beneficial owners are able to avoid scrutiny by tax authorities. In many tax havens you can buy shell companies off the shelf, complete with a dummy CEO and board of directors.

1 Ostensibly used to avoid ‘double taxation’ situations of being forced to pay tax on the same income in two jurisdictions. In practice, such treaties often aid in ‘double non-taxation’, where no tax is levied in either.

2 Tax treaties (modelled on the advice of the wealthy nations of the OECD) are also used to prevent poor countries from levying taxes on foreign investors.

1 The process of putting your capital into a tax haven and then sending it back, in a disguised form, to your home country as an investment in the equity or debt market originating from a foreign source.

2 The purpose of this round trip is that in some tax jurisdictions (the US, for example) capital from foreign sources is taxed at a lower rate than domestic investments in order to attract more of it.

3 It is estimated that if US taxes go up one per cent, the amount of untaxed foreign capital from tax havens pouring into the US mysteriously increases, jumping by as much as 2.8 per cent. Much of it is US capital in a foreign guise making the round trip and avoiding taxes.

Fox in charge of the hen house
Ending the offshore bonanza