The ambassador of joy

Tatiana Vivienne reaches out to women in the violence-torn Central African Republic. She talks to Louisa Waugh. 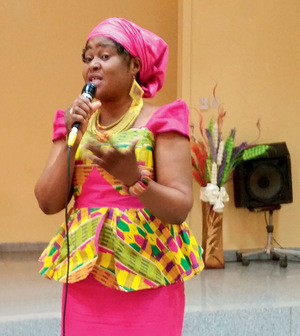 While Bangui was full of armed rebels, Tatiana rescued girls and young women who had nowhere else to go.
Photo: Conciliation Resources

I remember hearing Tatiana before I first saw her: a great peal of dirty laughter erupting from inside her office, as she threw the door open and stood, beaming, before us. It was spring 2014. I had just taken up a post in Bangui, capital of the Central African Republic (CAR). A new colleague had insisted I meet Tatiana, so we had swung by her office.

As we kissed each other in greeting, she started to laugh again. It was infectious. Tatiana Vivienne (Tati to her friends) is a Central African force of nature who runs her own NGO, Femmes Action Plus, in Bangui, where she lives close to her extended family. Her organization is known for supporting some of the most traumatized communities in CAR. ‘We are the voice for the voiceless,’ she says to me with fierce pride. ‘I am telling you, my sister, we work down at the roots: we support those most vulnerable communities who are ignored and neglected.’

Despite armed robberies, being forced to close down her office and chronic shortage of funds, Tati has never stopped speaking out. Throughout the last three years, when Bangui’s streets were filled with armed rebels, she took in girls and young women who had nowhere safe to go. She works in some of the most exposed corners of Central Africa with forgotten communities who have endured appalling violations, including kidnapping, slavery and being forced to kill others.

Tati had grown from being a devoted student to a full-time carer, before emerging as a humanitarian (and war crimes) activist. ‘I have lived several different lives already,’ says Tati, now in her mid-thirties. ‘When I was growing up on the edge of this city we were ten children – four girls and six boys. But I was very lucky, I am telling you. My father believed in education, so we were all educated.’

When she was about five her father secured a new job. The family left Bangui for Baboua in northwest CAR, where Tati studied at the local Catholic school. In rural CAR, literacy rates for girls are as low as 22 per cent. But Tati and her siblings thrived.

This was the late 1980s, a relatively peaceful era. Tati’s family thrived at home too, until their mother became suddenly and increasingly ill. ‘She fell very sad, then depressed.’ Aged just 11, Tati began to spend periods away from school, looking after her. ‘But I learnt from this, too. I learnt to manage complex projects, personal and professional ones.’

Despite time out of school, she passed her baccalaureate. Her mother regained health and Tati left CAR in 1999, to study first in Ghana, then Nigeria.

She would have stayed on in West Africa but a visit home in 2009 changed everything. Tati’s family were now back in Bangui. ‘My older brother had a terrible accident and my father fell ill. I lost them both within three months. It was terrible for us all – can you imagine the effect on my mother? I couldn’t leave her. I decided I was going to stay in Central Africa: so I must do something for my country – stand up for those who have no-one supporting them.’

The political landscape had changed, too: in 2003 President François Bozizé had seized power in a military coup, leaving CAR wracked with violence and fear. Political opponents were arrested or assassinated, and communities outside Bangui abandoned to fend for themselves. Most NGOs confined themselves to the safest areas: international organizations barely worked in CAR because donors weren’t interested in this obscure, violent country ruled by a vicious dictator. Tatiana started volunteering with a local NGO, JUPEDEC, one of the few supporting vulnerable communities.

In 2010, she travelled to Obo in the Haute Mbomou province of remote south-eastern CAR, to meet women and children who had been targeted by the Lord’s Resistance Army (LRA). Inspired by their messianic leader, Joseph Kony, LRA fighters have kidnapped at least 38,000 women, men and especially children across the region, leaving a whole generation traumatized. Villages across Haute Mbomou emptied as people fled to Obo for refuge.

‘Women who had escaped from the LRA have suffered things you hardly bear to believe. Some have witnessed their own husbands being killed and eaten by LRA men.’ Children in LRA captivity have been horribly brutalized, through rape, slavery, or being forced to kill other children. ‘I met girls of twelve with two children because of rape. Even if they escape, their communities often reject them – saying they are contaminated by the LRA. No-one fights for them.’

'I've spent so much time with these communities not blaming them, but understanding'

In 2011 she set up Femmes Action Plus, with just two volunteers and the support of a British peacebuilding organization (Conciliation Resources). Travelling to Haute Mbomou on a regular basis, she supported communities through training, advocacy and reintegration initiatives. ‘I remember a community meeting in Obo where a woman with five children, who had been rejected by her husband and community, was accepted back,’ she tells me, her eyes shining with pride. ‘I’ve spent so much time with these communities – not blaming them, but understanding. And now I see more people being integrated.’

LRA attacks on villages in Haute Mbomou have reduced as Kony is now frail, possibly even dead, though LRA fighters still terrorize local populations. Thousands of internally displaced people are still camped in makeshift homes in and around Obo. This is an unpopular cause, a lifetime’s work with little or no recognition: and Tatiana has never wavered. I’ve seen her render heads of international organizations speechless, even tearful, by testifying in explicit detail how survivors have struggled, even occasionally returning to the LRA, because the continued rejection by their community was unbearable.

Tati works with communities in Bangui, too. She has set up education programmes for some of the most excluded women and children, especially those who were targeted by Seleka rebels in 2014, and then the anti-Balaka (who fought Seleka for control of CAR).

Her house has been burgled by armed robbers three times, and in 2015 she was forced to close her Bangui office, for fear it would be ransacked and she would lose everything she had worked for. Bangui is still wracked by cycles of violence and Tati does not feel safe enough to return to her family home in central Bangui. She lives in a discreet corner of the city.

Amid the great challenges, there have been moments of recognition. Her work with LRA victims led to her being invited to The Hague for training on documenting war crimes. She is breaking new ground in CAR in supporting international cases against senior LRA commanders. And her NGO is now Femmes Hommes Action Plus, because as she says, ‘We need our brothers to walk alongside us.’

I once asked if anyone had ever suggested she stop for her own good. ‘My family tell me to take a rest because they see I am very tired: but I ask who will do this work if I go? We have to support our own people, n’est-ce pas?’

I left CAR last year, and Tati and I keep in touch. During a recent phone call she says that funding for her work is still a great struggle. But she has wonderful news too, of a very different kind.

‘I’m getting married!’ she squeaks with excitement. Her new husband is a Central African human rights lawyer – and a presidential candidate.

‘Can you imagine – I could even become the First Lady?’ Her dirty laugh booms down the crackly phone.

Louisa Waugh is a writer and human rights advocate who works for an international peacebuilding NGO in Mali. She loves late-night dancing, and blogs at the-waugh-zone.org

Justice turns its back on us
Dancing with fear