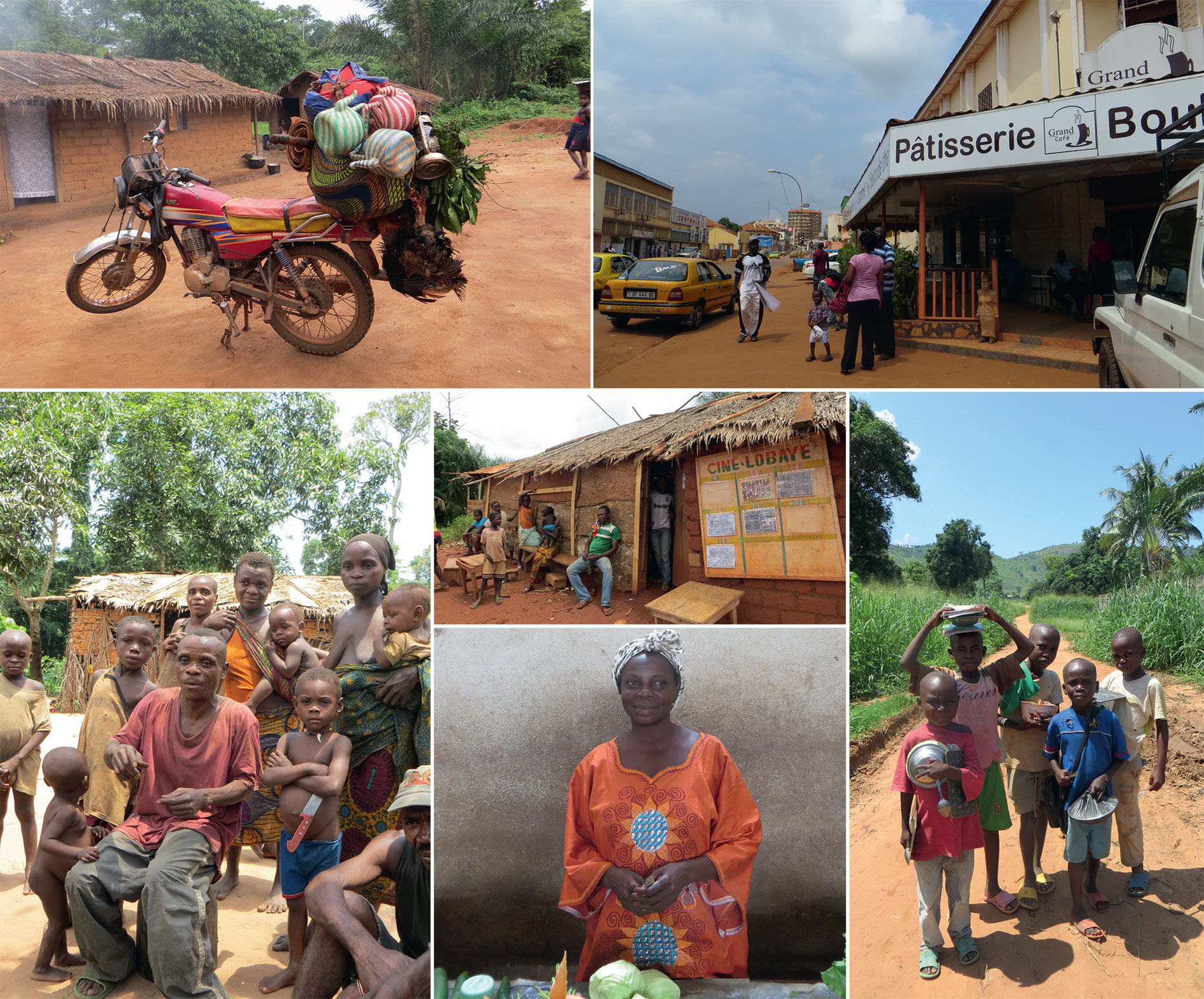 Clockwise from top left: Motor bikes are a common way of travelling across the country – this one is in the southwestern rainforest region of Lobaye; the Grand Café is a popular meeting place in Bangui’s centre ville; children taking their lunch plates to school; women run most of the stalls in Bangui’s central market; Ba-aka forest people live in isolated settlements in the rainforest, where they maintain their indigenous beliefs; (centre) a local generator-run cinema in the countryside.
Ruby Diamonde

Spread across the heart of Africa, the landlocked, forested Central African Republic (CAR) is one of the remotest and least-known countries on Earth.

Landing at the shoebox-size airport is itself a revelation. There you’ll find aid workers, gold prospectors, missionaries, African and French soldiers arriving and departing – but no tourists. These last 12 months have seen CAR written off as an effective tourist no-go zone.

The drive from Bangui airport into the city takes you past some of the capital’s roughest-looking quartiers, with dubious-sounding names – like Combatant, Boy Rabe and Bimbo. By day, these quartiers are noisy and crowded with markets, small restaurants and many bars. But by nine o’clock in the evening most streets are deserted. Families go home, lock their doors and windows and keep a low profile. Gangs of armed burglars roam the city, breaking into houses and jacking cars. Colonialism, belligerent despots and a succession of violent military coups have shattered security. 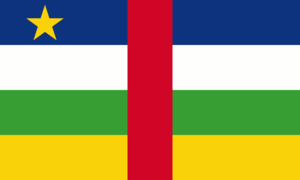 French colonialists first occupied this area of central Africa, bigger than France itself, at the end of the 19th century, having seen the riches plundered from neighbouring ‘Belgian Congo’. The French mined CAR’s gold and diamonds and felled its timber, often using forced local labour, while white missionaries relentlessly preached Catholicism. When the French finally withdrew, in 1958, a former priest, Bartholemy Boganda, became the Central African Republic’s first independent leader. Just months later he was killed, maybe murdered, in a plane crash, creating a power vacuum that has been filled by one despot after another, most infamously by Jean-Bedel Bokassa, who declared himself ‘Central African Emperor’ in 1976. Bokassa was a megalomaniac sadist – his throne was a lavishly carved gold eagle and he was later convicted of murdering schoolchildren.

In 1979 Bokassa was deposed by the French, who installed a compliant lackey, who was overthrown by the next military junta. And so it went on.

These unelected leaders rapaciously promoted members of their own ethnic groups, fuelling tensions across the country. A low-intensity civil war smouldered in northern CAR for years. Regional peace talks failed to stem the violence, with rebels fighting the government and each other, while civilians bore the brunt of both sides’ ferocity. At the end of 2012 a handful of these disparate rebel groups came together, calling themselves Seleka, or ‘Alliance’ in the national Sango language. Accusing the incumbent government of treachery, they recruited more fighters, including mercenaries from neighbouring Chad and Sudan. Three months later they marched on Bangui.

When Seleka launched its takeover, amidst a frenzy of killing, raping and looting, the world suddenly remembered the Central African Republic. Ex-pats fled en masse, but civilians had nowhere to escape except the bush and the forest. Seleka installed itself as the country’s first Muslim-led government – ruling by brute force. Tensions between the majority Christian and minority Muslim populations have boiled over into sprees of horrifying violence, especially in northern CAR.

After months of state brutality, thousands of local people occupied Bangui airport in protest. Seleka President, Michel Djotodia, promised to restore the rule of law, and regional peacekeepers are now running a national disarmament campaign. Yet power struggles rage within Seleka itself, and swathes of the country remain effectively lawless. For the majority of Central Africans, who are subsistence farmers, life is a physical struggle against a political backdrop of fear. Perhaps the most remarkable thing about this beautiful, fragile country is that, despite teetering on the brink of chaos for years, it has never quite imploded. 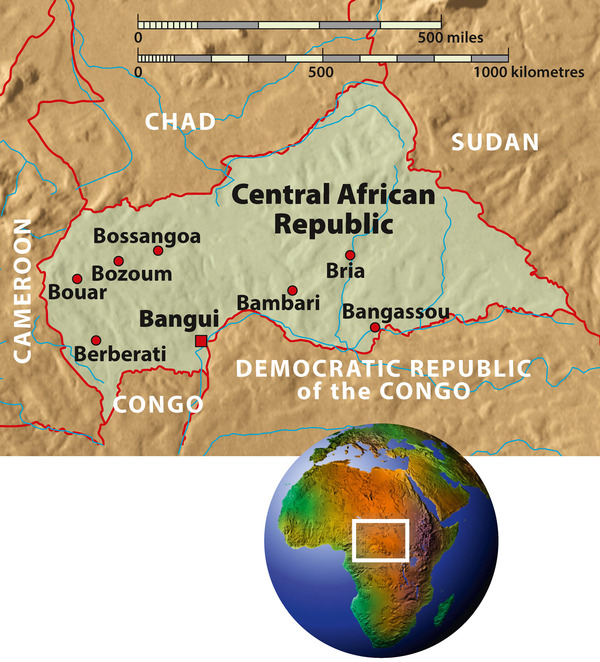 Leader
President Michel Am-Nondokro Djotodia.
Economy
GNI per capita $470 (Cameroon $1,210, France $42,420).
Monetary
Central African CFA franc, shared with Cameroon, Chad, Congo-Brazzaville, Equatorial Guinea and Gabon.
Main Exports
diamonds, precious metals and timber have traditionally been CAR’s strongest exports, followed by cotton, beeswax, spices and coffee. But the country’s infrastructure has been devastated by years of low-intensity conflict, military coups and chronic neglect. Exports as a result are currently negligible.
People
4.5 million. Annual population growth rate 1990-2011 2.0%. People per square kilometre 7 (UK 257).
Health
Infant mortality 108 per 1,000 live births (Cameroon 79, France 3). Malaria is a major child killer. Due to ongoing political crises, and widespread looting of hospitals and clinics, the healthcare system is patchy at best and minimal in many places.
Culture
There are more than 80 different ethnic groups across the country, the largest of whom are the Gbaya, the Banda and the Mandjia. The M’Baka forest peoples (also known as pygmies) represent 4-7% of the population, and live in the equatorial forests of southwestern CAR. Muslims from Chad and Sudan have settled in the north and east.
Religion
Christians (mainly Catholic) 80%, Muslims 10-15%. Indigenous beliefs are also celebrated.
Language
The official language is French but the national language is Sango. In rural areas many people speak only basic French, and Arabic is also widely spoken in the north.
Hdi
0.352 – 180th of 187 countries (Cameroon 0.495, France 0.893).

Income Distribution
International investors have fled, and many businesses have collapsed due to Seleka looting. Beyond the capital, most survive on subsistence farming and small-scale trading.
2001
Life Expectancy
48 years – the world’s joint lowest, due to a toxic combination of meagre health resources, virulent strains of malaria and respiratory infections, and chronic poverty.
2001
Position Of Women
Foreign Minister Banga Bothy Leonie is a rare exception of a woman in a position of power. Seleka has been widely accused of raping young women and girls, while childless widows are vulnerable to accusations of sorcery.
2001
Literacy
56%. Many rural schools have not reopened this year, due to Seleka extorting money from teachers, and parents fearing for their children’s safety.
2001
Freedom
During its takeover, Seleka unleashed a culture of fear across the country. It may now be trying to clean up its act, but the Bangui government will struggle to rein in renegade Seleka rebels, and other heavily armed militias in the bush.
2001
Sexual Minorities
Homosexuality is technically legal but there is little toleration of it, and no real concept of any other sexual-minority status.
Politics
Public anger at Seleka’s horrific human-rights violations, coupled with growing international condemnation of the new regime, is having some impact, but in villages across the country, where life is already harsh, people still live in fear of Seleka rebels. Any meaningful political opposition is currently non-existent. International pressure on Seleka is essential, and the elections scheduled for the end of 2014 must give Central Africans a genuine opportunity to hold the regime to account.
2001

Letter from Botswana: The rule of nostalgia
Who is Olli Rehn?