Praise, blame and all points in between? Your feedback published in the November 2017 magazine. 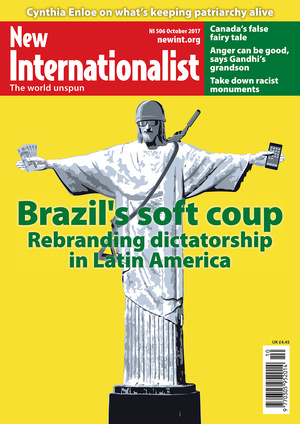 In an otherwise excellent article on Brazil (‘Brazil’s soft coup hardens’, NI 506), Vanessa Baird’s one-sided jibes at evangelical Christians there were not balanced by the recognition that Marina Silva, former PT environment minister and Green presidential hopeful, is herself an evangelical Christian.

Re: NI 505, imho, there is only one way in which to change the way we educate our children for the better and that is by changing the way we organize society – from one which is imposed from above to one which is ‘self-regulatory’, for, given the current divided, unsustainable and dysfunctional state of affairs on this planet, both are urgently required.

Re: ‘Between a shark and the deep sea’ (NI 505). Sounds like the perfect system of education to bring about a generation of Trump-voter-types in any country one chooses... All they need are a couple of ‘business schools’ and neoliberalism will be so firmly entrenched nothing will shift it.

Re: your review of The Young’uns album (NI 505). Having heard The Young’uns perform live, I was surprised to read in your article that they’re apparently from ‘England’s northwest’. I checked and it turns out they are from Stockton [County Durham, hence northeast] – as their accents suggest.

Re: ‘Deliver us from Venus and Mars’ (NI 505). I’m a software engineer who can read a map, has spatial awareness, likes football, used to ride a motorbike, hates pink etc but yet I am female. I hate make-up and dresses and have no desire to have any children, yet society implies that I am not being a ‘proper’ female! Surely society would gain if we were all able to just be ourselves and contribute in any way that suits, rather than being coerced into stereotypical roles?

Re: ‘When the police are paid by the mine’ (NI 505). Police forces more or less exist for the purpose of protecting private property. Corporations tend to just own the most.

For a magazine that aims to report on the truth, you seem very one-sided when it comes to vaccine issues, eg ‘Nigeria Dares to Hope’, NI 503. Perhaps you need to take a closer look at this subject. There is plenty of material for reporters to investigate. See the Vaxxed movie for a start.

The dangerous dignity of war
Lights in the mountains
Back