Madness on the Mekong

Tom Fawthrop reports from Southeast Asia, where a series of proposed dams could trigger a food crisis. 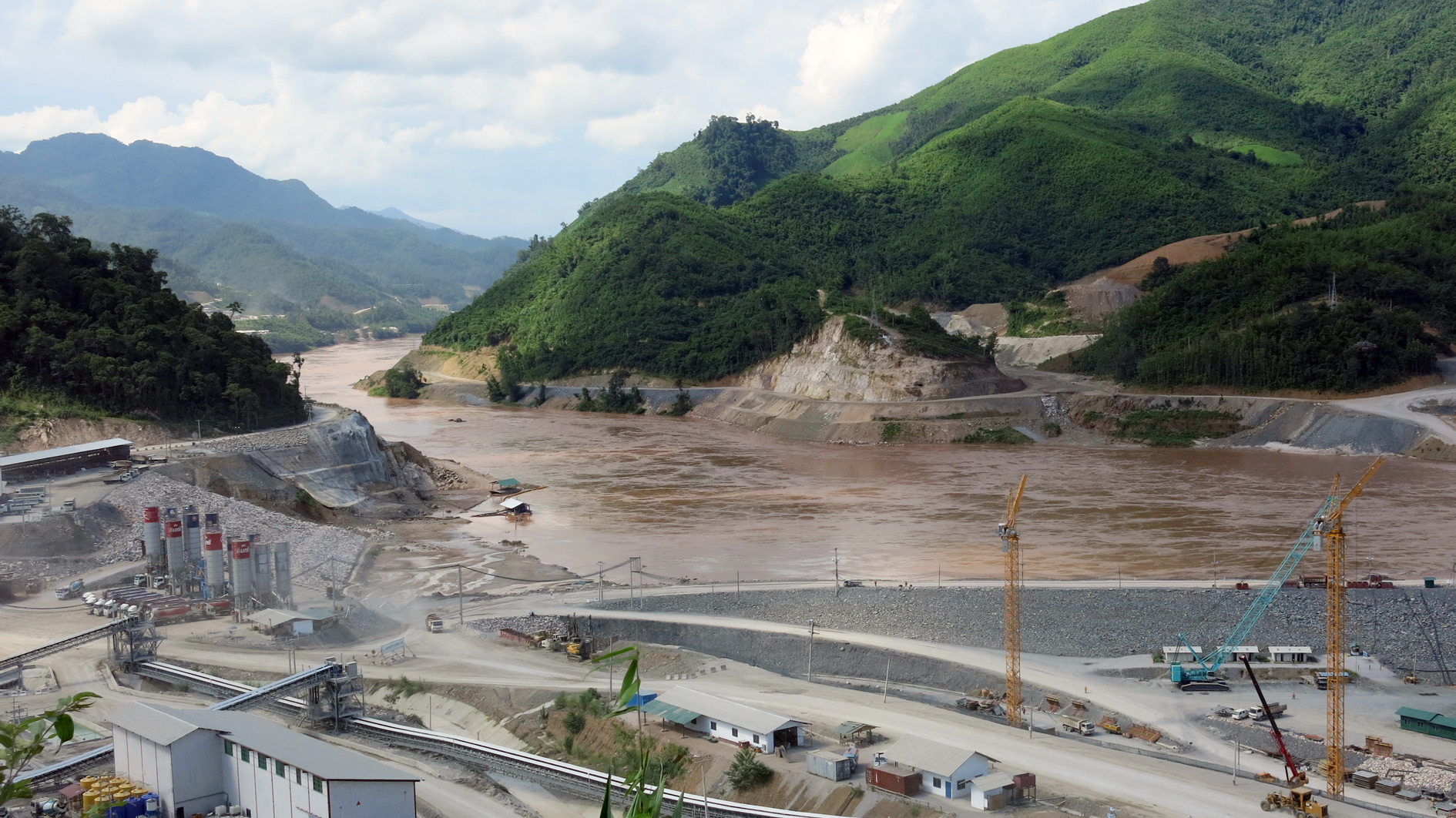 The point of no return? Construction of the Xayaburi dam is well under way, despite fierce opposition.
Photo: Tom Fawthrop

The mighty Mekong River has enchanted explorers, inspired travellers and beguiled traders for centuries. From its source high in the mountains of Tibet, it flows through six countries, snaking its way through the heart of Southeast Asia for 4,880 kilometres before its journey ends in the fertile delta of Vietnam.

Home to two critically endangered species – the giant catfish, which can reach three metres in length and weigh 290 kilograms, and the Irrawaddy dolphin – the Mekong surpasses the Ganges, the Nile and even the Amazon as the largest and most productive inland source of fish anywhere in the world. Its bounty provides protein, and food security, for 65 million citizens along its banks and beyond.

‘The Mekong is very special for the people,’ says Nita Roykaew, a teacher and environmental activist for the ‘Save the Mekong’ campaign. ‘The community understands what is important for their life: water, forests, soil and culture. The river provides everything: fish, vegetables and herbs. The Mekong is our mother.’

The river’s name itself confirms this: Mekong is derived from mae nam kong, which is understood as ‘Mother of Waters’ in Thai and Lao.

In a 1994 report, a consultant for the intergovernmental Mekong River Committee described one section of the river, the Khone Phapeng Falls in southern Laos, Asia’s widest waterfall, as ‘an ecologically unique area, so rare in nature that every effort should be made to preserve [it] from any development’.

Since 1999 the Cambodian side of this area of wetland has been protected thanks to the country’s signing of the Ramsar Convention, an international treaty for the conservation and sustainable use of wetlands. But despite the Khone Falls being an eco-tourism paradise with all the credentials to qualify as an internationally protected zone, Laos has not followed its neighbour’s example. These ecological riches are now at imminent risk from plans to build a hydropower station in their midst. The 11 proposed dams along the Lower Mekong will not only threaten the pristine natural environment and people’s livelihoods, but dramatically alter the course of the free-flowing river for ever.

In southern Laos, near the Cambodian border, the river splits out into a braid of separate channels, offering up a glorious panorama of majestic waterfalls and swirling rapids. These rapids create endless islets – which give this region its name, Si Pan Don or Four Thousand Islands. Just upstream, a colony of Irrawaddy dolphins draws many visitors, sustaining a growing eco-tourism industry that directly benefits local communities.

Of the seven braided channels, the Hou Sahong channel is widely recognized by fisheries experts as the key artery of fish migration. Yet it is within this precious wetland zone that Malaysian hydropower company MegaFirst plans to build a 256-megawatt hydroelectric dam. 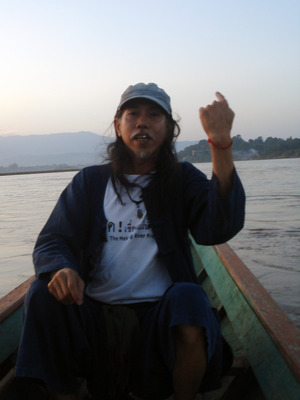 This dam is the second of a cascade of 11 mapped out and approved by the Laos government. Construction of the first dam, at Xayaburi, began in November 2012 in the face of fierce opposition from NGOs in Cambodia, Vietnam and Thailand, from numerous scientists, and from Cambodia and Vietnam – two of the four member states of the Mekong River Commission (MRC, founded in 1995). The project is being bankrolled by loans from four of Thailand’s biggest banks. Once operational, 95 per cent of the electricity produced by the dam will be purchased by Thailand.

The campaign to stop the completion of the Xayaburi dam, which is now about a third complete, has engaged both regional and international NGOs. Thailand’s major role in the dam’s construction has even come under pressure in the courts. Backed by NGOs, Thai farmers from provinces bordering the Mekong have filed a lawsuit against the Thai government and the state-owned electricity commission EGAT for signing the power purchasing agreement (PPA). The farmers say that the PPA was approved by the Thai authorities in violation of legal safeguards providing for public debate and parliamentary oversight. On 24 June, the Bangkok Administrative Court agreed that there was a substantive case.

Meanwhile, a Vietnamese NGO network is lobbying Thailand’s banks to stop bankrolling the dam. Sarinee Achavanuntakul, a former Thai banker, notes that ‘investors are clearly getting nervous and I think the banks are now more nervous. The Thai court ruling, the warning letters to Thai banks from Cambodian and Vietnamese opponents of the dam – these are alarm bells. I believe there is significant financial risk.’

‘The stakeholders have plenty at risk,’ agrees former Thai senator Kraisak Choonhavan. ‘The four banks all have expansion plans in Vietnam. They must withdraw from the dam or face growing displeasure.’

Now, the prospect of a dam over the Hou Sahong channel has triggered a new flurry of opposition across the region. A coalition of 103 Thai NGOs, drawing support from eight provinces which border the Mekong, have demanded that the Thai government take immediate action to block the project.

Chhith Sam Ath, representative for WWF in Cambodia, warns: ‘The Don Sahong dam will only push Cambodia and Vietnam closer to a food crisis. The project is next to Cambodia’s border. Have they forgotten that fish are our lifeline and the backbone of our economy? Fish are central to our diet.’

Eighty-one per cent of dietary protein consumed by Cambodians is drawn from fish and crustacean sources, according to So Nam, a Cambodian expert now working for MRC fisheries department. ‘Cambodia has one of the highest rates of fish consumption [in the world],’ he says. ‘It comprises 12 per cent of GDP.’

This has prompted scientists to warn of grave consequences for food security in the region if fish migration is blocked by a dam across the Hou Sahong channel. Currently, around 90 per cent of migratory fish in the river use this key channel to bypass the Khone Falls and rapids.

‘The dam will only push Cambodia and Vietnam closer to a food crisis. Have they forgotten that fish are our lifeline and the backbone of our economy?’

Ian Baird, a fisheries specialist at the University Of Wisconsin-Madison in the US, predicts a dangerous downward spiral: ‘The Don Sahong dam would cause serious nutritional problems throughout the Mekong region,’ he explains. ‘Decreasing availability of fish in the marketplace would lead to higher prices, reducing fish consumption, especially by poorer consumers.’

The search for a technological solution to help the fish avoid the blocked passage and the turbines at Xayaburi is based on the promotion of fish ladders and sediment flushing.

‘Mitigation’, as the buzz word of the hydropower industry has it, will reduce the negative dam impacts on the fragile ecosystem.

The Laos government has hired Poyry Energy Asia, a Finnish-Swiss company based in Zurich, to take charge of the design and mitigation measures at the Xayaburi dam. According to the company’s Asia director, Knut Sierotzki, ‘The dam will employ “fish-friendly” turbines developed in the US. The dam would also undertake “sediment flushing” and provide fish ladders and fish lifts.’

Sediment flow is essential for the health of a river and its inhabitants – especially fish. Poyry boasts that the company will ensure that 80 per cent of the fish will be able to continue their journey up- and downstream. 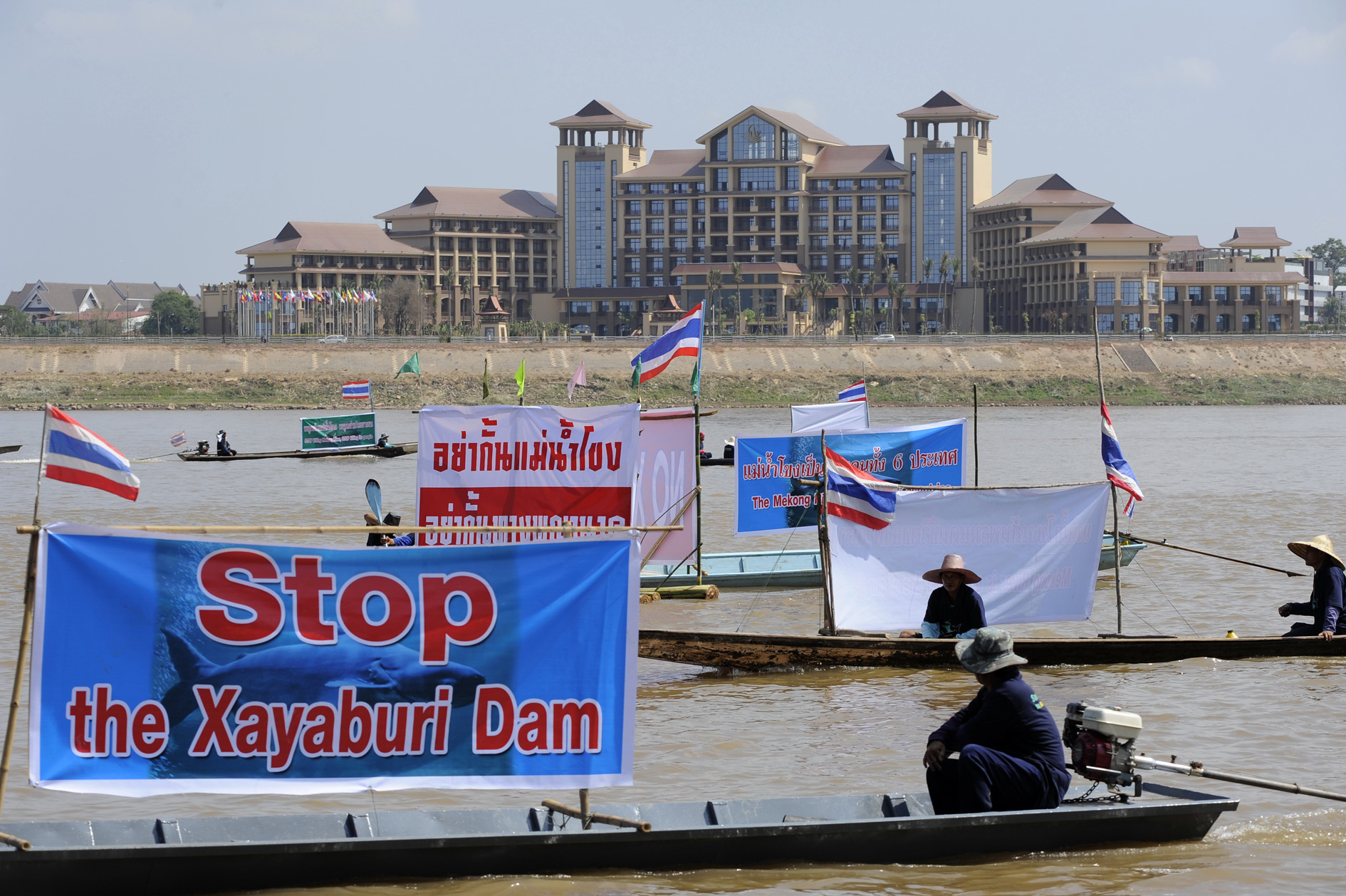 Thai NGOs stage a boat protest on the Mekong River in Laos. The convention centre on the opposite bank was hosting a major international conference.
International Rivers

Scientists, however, point out that the fish-ladder and fish-pass technology has so far only been tested and practised in colder climates.

Dr Jian Hua-Meng, a German-trained engineer who now works as WWF’s hydropower consultant, is astounded by the assumption that fish technology can be readily transplanted to tropical Asia. ‘Building a fish pass based on the experiences of northern Europe and Switzerland and transferring them to the Mekong is just not serious business. According to the developer, this is a dam that is so benign that it will have little or zero impact. This is nonsense. It is plain ridiculous.’

Critics also say the company’s fisheries studies are being rushed. A 2011 study by Northwest Fisheries Science Center in Seattle concluded that it would take decades of research ‘to ensure that specialized fish-passage facilities actually meet the needs of these diverse fisheries of the Mekong’.

MegaFirst dismisses concerns about the threat to fish stock as ‘unfounded’. Its senior environmental manager, Peter Hawkins, claimed in the Vientiane Times that ‘environmental impacts can be mitigated by using other natural channels adjacent to the Hou Sahong’.

But although engineers have started to blast rocks to make the other channels wider and deeper, so as to accommodate larger fish, Philip Hirsch, director of the Australian Mekong Resource Centre, questions whether so many different fish species will go along with this engineered river diversion: ‘Let us see the results of their science for independent verification and peer review before we get to the point of no return in dam-building,’ he says.

The Mekong River Commission, whose member states are Cambodia, Laos, Thailand and Vietnam, was set up to facilitate peaceful dialogue, co-operation and good governance of the Mekong and its precious resources. However, the secretariat has no regulatory powers and the four member states lack any veto provision against the controversial new dam-building projects that threaten the river’s ecological riches.

In response to strong pressure from the other three member states, the Laos government has reluctantly accepted the need for a six-month consultation process to review the Don Sahong dam project. However, the Laos authorities rejected a request from their Mekong neighbours to halt preliminary dam construction during the consultation period.

Philip Hirsch says that the MRC ‘should be taking heed of the best science. Its own research shows that the Don Sahong dam is highly risky.’ But he laments the fact that the CEO of the MRC, Hans Guttman, has failed to adopt the precautionary principle: ‘You don’t [just] go ahead with projects and see what happens. Before you launch a dam, you make sure you have got it right.’

If these two dams go ahead, the fear is that they will have a trigger effect, helping the other nine dams to get the green light.

‘You don’t just go ahead with projects and see what happens. Before you launch a dam, you make sure you have got it right’

Vietnamese wetland ecologist Nguyen Thien envisages a grim future for his country should the whole river be dammed. Currently, Vietnam is the second-largest rice exporter in the world, but, says Thien, should all 11 dams become operational, ‘the delta will lose its capacity for producing rice for export. Vietnam will probably still be able to feed its own population, but not to export rice to feed anybody else. This will have implications for rice-buying countries; the price of rice will be more expensive for all.’

In a world of declining food security and rising global prices, the future collapse of Vietnam’s rice exports has serious implications both for the region and the world. So where is the global outcry against this disaster in the making?

Regional leaders have said nothing. Key UN agencies such as the World Food Programme and the Food and Agriculture Organization, which will be directly affected by this food deficit, have been conspicuously silent. Not a single world leader has sounded the alarm over this madness on the Mekong.

The way WWF consultant Jian Hua-Meng sees it, ‘the developer wants all the stakeholders to follow him blindly into an uncertain future and watch him play a very risky game of roulette. The stakes for 60 million people are too high for this to go ahead.’

Tom Fawthrop has covered the Mekong region for 30 years as author, filmmaker and journalist. He is the director of the documentary Where Have All The Fish Gone? and is currently working on a sequel about fisheries food security and damming the Mekong.